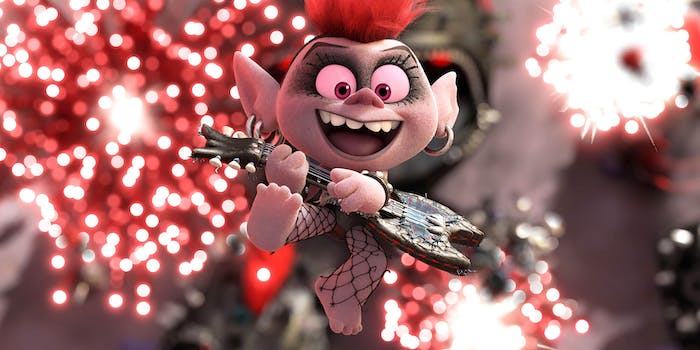 How to stream ‘Trolls World Tour’

In a world where music reigns supreme, harmony and unification are more important than ever.

Way back in the year 2016 DreamWorks released the animated musical hit, Trolls. And now four years later, we’re finally getting a sequel.

In Trolls World Tour, Poppy and Branch make the startling discovery that they’re not the only tribe of tuning Trolls around. In fact, there’s actually six of them! Scattered across different genre-specific lands, each tribe has perfected their own sound: funk, country, techno, classical, pop, and rock.

Sounds like their world is about to become much bigger and larger, no? Not if Queen Barb and her father, King Thrash, have anything to do with it. The members of hard rock royalty want to destroy all other types of music so that rock-n-roll can reign supreme. In order to save musical diversity, Poppy and Branch must call on their friends to seek out the other tribes, unifying the Trolls in harmony and upstaging the king and queen of rock.

Here’s everything you need to know to watch Trolls World Tour.

The online retail giant is also one of the premier destinations for online streaming. This is the easiest way to watch Trolls World Tour movie, no question. If you already have an Amazon account, buying in either HD or 4K will take seconds, and you can watch it anywhere you stream Amazon Video, from Amazon Fire Stick to Roku.

Fandango and movies go hand in hand, and not just when it comes to buying tickets online. Plenty of hits and classics are available in the FandangoNOW library, along with full seasons of your favorite shows. the Sonic the Hedgehog movie is available on FandangoNOW in multiple formats. If you join Fandango VIP, you can rack up points to spend across Fandango and FandangoNOW.

Vudu is a no-fuss way to rent movies online if you don’t want to bother signing up for anything. There’s a massive library of high-quality video content, including 4K movies. There are even piles of movies you can watch free as long as you sit through a few ads. Trolls World Tour is available to buy right now, in SD, HDX, and UHD. You’ll have to wait a little longer if you want to rent it.

If you prefer streaming on iOS devices, buying Trolls World Tour on iTunes is your best bet.