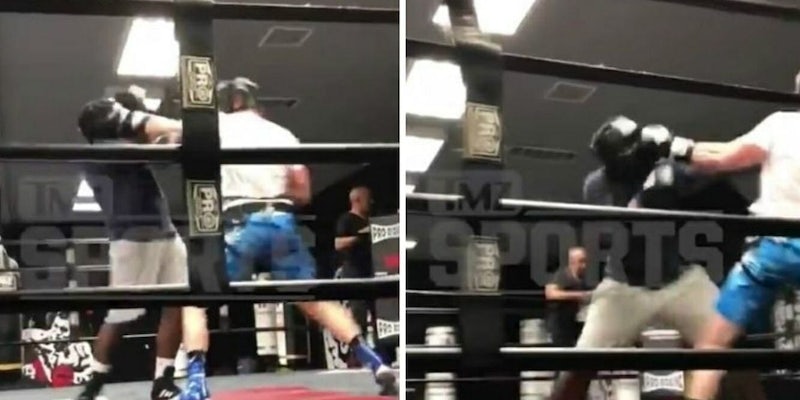 Is Logan Paul a good boxer?

This training video is impressive. But not so fast.

As Logan Paul and KSI are training for their Aug. 25 YouTube boxing match, the two have continued their trash-talking ways across the internet.

But as a recent training video shows, it appears that perhaps Paul really can fight. In a 30-second video obtained by TMZ, Paul is seen sparring with an opponent, landing a few shots and then knocking him down with a left hook to the face.

Paul, who has 17.5 million YouTube subscribers and recently ended his daily vlog to focus more on his Twitch livestreaming and his boxing training, has been feuding with KSI ever since the British YouTuber called out Paul and his brother Jake following KSI’s knockout win vs. Joe Weller last February.

It took months for the two sides to agree to a deal, which apparently is a 50-50 split, but after Paul confronted KSI (18.7 million subscribers) at a boxing gym in Las Vegas, Paul and KSI shook hands on an agreement.

That hasn’t stopped the trash-talking in recent days, though.

What do you hear? pic.twitter.com/EMGvP3AajL

your comebacks are worse than your music https://t.co/WzlboTpsEP

The result of all of this will likely be a massive event on YouTube—after all, the KSI-Weller fight was viewed tens of millions of times on YouTube and it sold out a 7,500-seat arena in London.

Though it was a few months ago, the initial training video for KSI wasn’t nearly as impressive. He posted a video of himself getting knocked to the ground by Badou Jack, one of the world’s best light heavyweight boxers, and Floyd Mayweather Sr.—a well-known trainer and the father of Floyd Mayweather Jr.—made fun of his technique (or lack thereof).

Though the one punch landed by Paul in the video seems impressive, it’s worth noting that knockdowns in sparring sessions don’t mean much. During the time when he was considered the scariest boxer in the world, Mike Tyson was flattened by a sparring partner named Mike Williams, a journeyman heavyweight who never had a significant victory in his career. While preparing for his eventual beatdown by Floyd Mayweather, MMA star and boxing neophyte Conor McGregor knocked down and/or pushed down Paulie Malignaggi, a two-division world titlist.

Paul caught his partner with a good punch, but that doesn’t mean he’s going to smoke KSI either. According to Skybet, Paul is still a slight 6/4 underdog, meaning you’d earn $150 if you bet $100 on him to win.