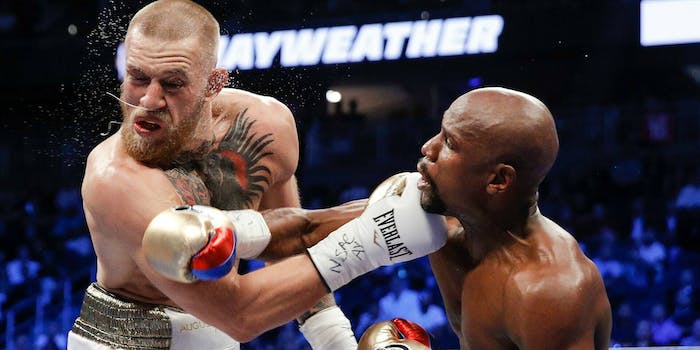 The internet knocked both fighters cold.

Floyd Mayweather, the best boxer of his generation, put on a fascinating farewell performance on Saturday night, knocking out UFC star Conor McGregor in the 10th round of their fight. Though McGregor, making his pro boxing debut, was given virtually no chance to succeed, he won a few rounds and surprised the masses by remaining competitive with Mayweather for much of the match.

Though McGregor—who was guaranteed $30 million but will likely make tens of millions more (Mayweather, meanwhile, was guaranteed a $100 million purse)—avoided taking Mayweather’s best punches until late in the fight, he couldn’t stop the Twitter memes from ultimately knocking him cold.

When you get knocked out but then you remember you made $100m @TheNotoriousMMA #MayweathervMcGregor pic.twitter.com/aGhq0sdnuf

McGregor, after he recovers from the fight pic.twitter.com/IxYE0MbuAI

To all the people who thought an MMA fighter was gonna beat a 49 time winning boxing champ #MayweathervMcgregor pic.twitter.com/dlNVhgLBD0

Me at the start of semester VS end of semester.#MayweathervMcgregor pic.twitter.com/tssATfxLVL

Twitter users also seemed to enjoy the outfit Mayweather wore during his ringwalk.

When you gotta fight McGregor now but rob a bank at midnight #MayweathervMcgregor pic.twitter.com/5GNW2WgICC

Some wondered about Mayweather’s documented issues with the IRS.

The IRS after Floyd won in the 10th round pic.twitter.com/sAe3QIIJf2

Those who watched the fight legally had to spend $99 for the pay-per-view telecast. Not everybody, though, ended up paying.

After the fight, Mayweather said he was retiring for good, and McGregor said he’d return to the UFC. But for one night, millions of people got together, watched a fight that was much better than expected, and then celebrated by making fun of McGregor and Mayweather on the internet.