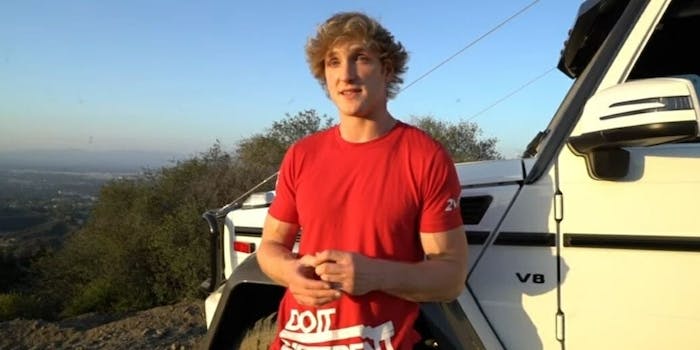 It's no longer every day, bro.

“It’s the end of that word—the daily vlog,” Paul said. “I have done a lot of vlogs every day in a row. I’m blessed and I’m thankful. But your boy wants to exercise his creativity in a different way.”

Paul also said that “it’s a happy day. Honestly, I haven’t been this happy in a while,” and he said another reason he’s ending his daily YouTube appearances is because he’s become so busy. He’s working on a new podcast, he wants to make more music, and he’s training for the Aug. 25 boxing match vs. fellow YouTuber KSI.

Paul also likely isn’t making as much money on the channel as he was before, which could be a contributing factor. He’s been embroiled in controversy since the beginning of the year when he posted a video of a dead body in a Japanese “suicide forest.” That led to YouTube kicking him out of the Google Preferred program, basically shrinking his ad revenue from the site in half.

After Paul apologized and said he would work on the topic of suicide prevention, he filmed himself tasering a dead rat and tweeted about eating Tide Pods. That led YouTube to temporarily suspend all of his ad revenue.

Eventually, he returned to the platform, but he has been far more lackadaisical in making daily vlogs. Instead, he began livestreaming Fortnite on Twitch earlier this month, much to the chagrin of the gaming community, and he’s been talking about doing more sketch comedy, like he did when he became a superstar on the Vine platform, with his pal, Evan Eckenrode.

“The vlog life has been absolutely incredible,” Paul said. “I don’t want to get emotional … I could go on all day to all the incredible things we’ve done. It’s a fan-driven channel …The vlog will never be finished as long as my heart stays thumping on this goddamned planet Earth.”

Turns out you’ll just have to wait a little longer between videos.