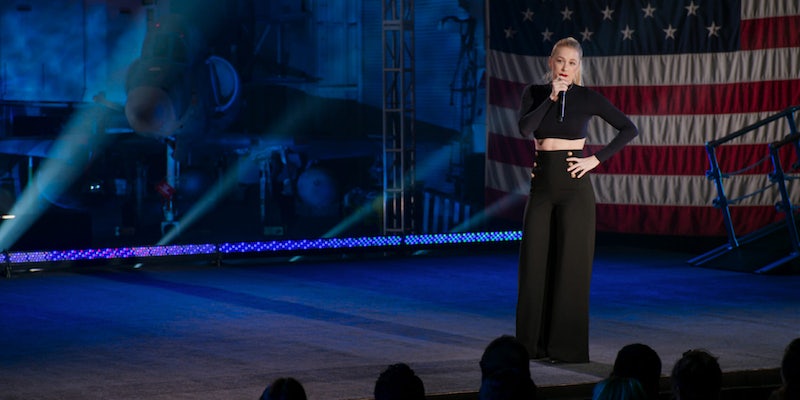 In ‘Elder Millennial,’ Iliza Shlesinger doesn’t have many new ideas about men and women

Iliza Shlesinger’s latest Netflix special, Elder Millennial, briefly explores the special’s title and surveys the pop culture of the early aughts. Remember Sidekicks?! But then it settles into the material Shlesinger is better known for: jokes about dating, body image, and the differences between men and women. It’s such well-tread territory, and Shlesinger is obviously comfortable there, but there were several moments when blanket statements about women’s behavior made me wonder who exactly this special is for.

When we spoke to Shlesinger ahead of 2016 special Confirmed Kills, she looked back at some of the jokes she made about women and claimed that “as I’ve grown as a woman and matured as a standup, and as a person who observes our society, I felt an obligation to not just make fun of women, but to sort of be on our side a little bit.” In 2017, Shlesinger weathered backlash for comments to Deadline about women in comedy and how “women want to be treated as equals, and we want feminism to be a thing, but it’s really difficult when every woman makes the same point about her vagina, over and over.” To many comics, it sounded like she was not actually on our side, and was instead making a blanket statement. She defended her stance, but fellow comedians let her know how they felt.

Yet in Elder Millennial, Shlesinger kind of delivers the same jokes about women over and over. As with Confirmed Kills, she details once again how women get ready to go out to the club, ostensibly to meet men and not just enjoy themselves as women. She says there is more risk for women when they try to hit on men because of our self-esteem issues, but that seems like a sweeping generalization. She hopes that one day, “Our great-granddaughters can hit on men,” and it’s not clear if that’s sarcasm but the brow, it furrows.

Shlesinger also claims that men are better at handling sexual rejection, though that’s definitely debatable, as witnessed by the communities that have grown around men’s belief that society is responsible for their lack of sex, and the Me Too movement. (Her 2017 book Girl Logic was set to be published last fall by Weinstein Books. She attempted to distance herself from Harvey Weinstein after allegations started coming out.) She asserts that men don’t find strong women attractive, but tries to justify that by pointing out the media we’ve been fed that tells us women can only discover they’re beautiful through men telling them so. “Whatever you want to be, you are correct in being that,” she says.

There are moments when she tries to follow that line of thinking: Women who don’t want kids are normal, she says. When a woman says no, it means no, she states during a bit about the time and effort women put into dressing up for men. She talks about her engagement to now-husband Noah Galuten and offers a bit about how he asked her not to wear basketball shorts to bed, giving some personal insight into her life. Elsewhere, she points out that men are often “not allowed to have feelings,” which is a fair and important point, but she doesn’t expand on it.

She does expand on women’s inner “dragon body,” perhaps a mirror to her “party goblin” bit. This special will certainly resonate with some women (and men) but it ultimately left me feeling a little sad. Shlesinger has always seemed aware that being too feminist could be bad for her brand, and that’s her prerogative, but parts of the special feel almost as outdated as the promo for it.