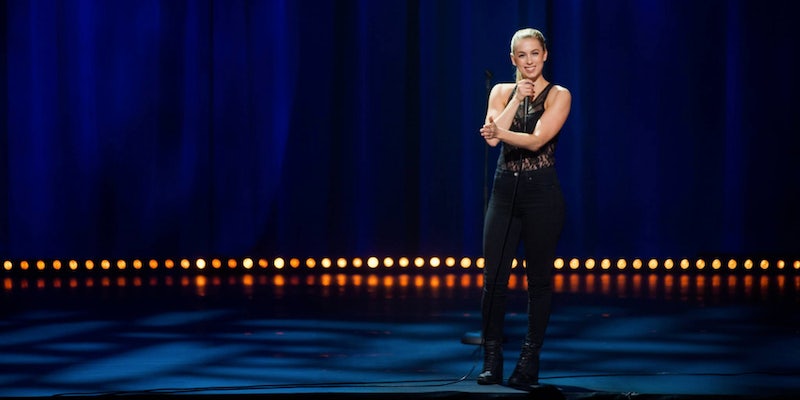 'I wanted to stand up for women a little bit and explain our behavior.'

Filmed in Chicago, Confirmed Kills finds the comedian taking a more muscled approach to her observations about men and women, which provide the foundation for her standup. But, as she relates, she’s tried to give those observations a little more heft this time around.

These gender parallels have become part of her brand, which started to flourish after her 2008 Last Comic Standing win. They can also be found in Shlesinger’s new ABCd show Forever 31, in which she hosts a webseries called The Iliza Show. Each episode explores topics familiar to her standup, too: dating, drinking, body image, party goblins. She says ABC initially passed on the show, but circled back about doing it for its digital arm, ABCd.

In season 2, she’s going to devote an episode to the history of the party goblin, which originated in her 2015 special, Freezing Hot, and has become one of her most popular bits: Fans have started drawing out their own party goblins at shows and putting them on T-shirts. The hook is that everyone has a goblin inside us, who opportunistically lowers our inhibitions.

Shlesinger is good at telling stories. While she indulges some well-tread bits in Confirmed Kills about women getting ready to go out and how they can never find anything in their big ol’ purses, a story about a woman struggling to find her lip liner on a date pivots into a more serious conversation about equality and vulnerability, and how women are “constantly battling” themselves on a daily basis. That focus on feminism is more pronounced with this special—something she attributes to maturity.

“I had this amazing platform and as I’ve grown as a woman and matured as a standup, and as a person who observes our society, I felt an obligation to not just make fun of women, but to sort of be on our side a little bit,” she says. “I think if you do too much satire sometimes the message might get obfuscated and at some point it’s like, ‘Whose side are you on?’ So I wanted to stand up for women a little bit and explain our behavior.”

She addresses the body-shaming that happens on platforms like Instagram and how young women don’t want to say they’re feminists because it’s seen as unattractive. Keeping in mind her male fans, she says her “brand” of feminism involves being OK with saying she’s attractive, and “being open and honest without male-bashing. You’re not going to get anywhere if half the population feels offended, though we’ve gotten along just fine thus far with that.”

Her performance style has become part of her brand, too. Shlesinger is a physical comic; she grunts, kicks, stretches her voice like a rubber band. The last third of the special is an especially masterful example, as Shlesinger depicts a live version of Shark Tank that goes terribly wrong and pulls out a dizzying array of voices.

Not every observation hits: Bits about black women and self-esteem and Latinas with “chili peppers” in their hearts don’t deliver any bigger truths, and one segment about women who want to be mermaids (is this an L.A. thing?) carries on a while without any real payoff. (But it makes good promotional copy.) Shlesinger can’t explain all women’s behavior. She’s not all women.

She admits she’s looked back on certain jokes and realized she can’t tell them anymore, citing one older bit where she calls women who walk through a club holding hands a “chain of whores.” Shlesinger says women respond to that joke, but “I would not call them that now. And it’s tough because I’m looking at women and wanting them to make smart choices, but you have to give young women some leeway because we all make mistakes.”

As Confirmed Kills is Shlesinger’s third Netflix special, I asked what she thought about the fact that 22 men got specials this year as opposed to three women. She says it’s about quality over quantity.

“I don’t believe in giving someone a special just because they represent a smaller group,” she explains. “There are more men who do standup, therefore there will be a larger pool of men to pick from. To be honest, I don’t know that there are a ton of women out there with a polished hour. … When I was doing clubs, I would look on the roster and in some cases I was the only woman there for months at a time. So, are there women out there that are brilliant and funny? Yeah, and maybe they don’t want a special.”

As comedy has become more popular, thanks to streaming and podcasts, it’s gotten more competitive, she says. But that breadth of access has also opened up comedy to a female audience.

“Not everything is 30-year-old guys talking about jerking off and how much he hates his wife,” she says.

Expanding her brand further, Shlesinger is set to be a guest on the new reality show Little Funny, starring young comic Saffron Herndon, and next year her memoir Girl Logic is scheduled to be released. The latter, she says, won’t be a sordid book about sexual conquests, more a “quasi academic” exploration of the “thought process that women naturally apply to things.”

“I believe that women, when making decisions, we have to take into account the past, present, and future, because so much is required of us.”