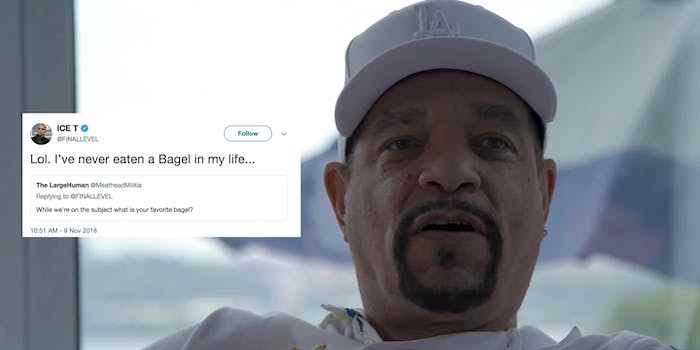 How is this possible?!?

Ice-T has never had a bagel in his life, or so he tweeted on Friday. Get this: He has also never had coffee.

Needless to say, the internet is shook.

Twitter user @kimsue1266 pointed out that he had a cinnamon raisin bagel while playing Odafin “Fin” Tutuola on Law & Order: Special Victims Unit. But if you look closely at the video clip by Vulture, Ice-T never takes a bite of the bagel, leaving it untouched.

Twitter expressed its disbelief, asking how it’s possible that in his 60 years of living, Ice-T—who was born in Newark, New Jersey, a stone’s throw from New York City, arguably the bagel capital of America (don’t fight me)—has never had what’s considered a staple breakfast option for most Americans.

You've been playing an NYPD cop for 18yrs and never had a bagel?

You've missing out man, give them a try!

you should try one dude

People started to debate what type of bagel Ice-T should have as his first. (Everything, of course.)

But what should he try for his first? Plain? Sesame? Everything? Blueberry? Toasted? Cream cheese? So many options.

Sesame. Ideally sesame egg or Black Russian, but sesame anything. And yes, cream cheese is required.

Everything bagels are EVERYTHING! And yes cream cheese is a must.

Everything with cream cheese.

Even Philadelphia Cream Cheese asked Ice-T if he would be willing to try some bagels; they’d even send him some.

Ice, we’re trying to remain calm, we’re just having a hard time letting you miss out on deliciousness. We’d be happy to send you some bagels and cream cheese so you can see for yourself. Thoughts?

Some even tried to defend Ice-T’s decision-making.

I had one once in Nevada and it was awful! Should I ever find myself in NYC I will take you on your word and try again :)

Most were just stressed out.

I’m from NY too and this actually stresses me out.

Me when I heard the news Ice T dishing tea that he’s never had a bagel ever…never…ever. pic.twitter.com/fgMVOKuI7K

Ice-T is not the only celebrity to have limited his food options. Apparently, Kylie Jenner has never had cereal with milk until this year, an experience she called “life-changing.” (Though, that claim has since been debated.)

So Ice-T, make like Kylie and try a very standard breakfast food and tell us what you think. Please put us out of our misery.