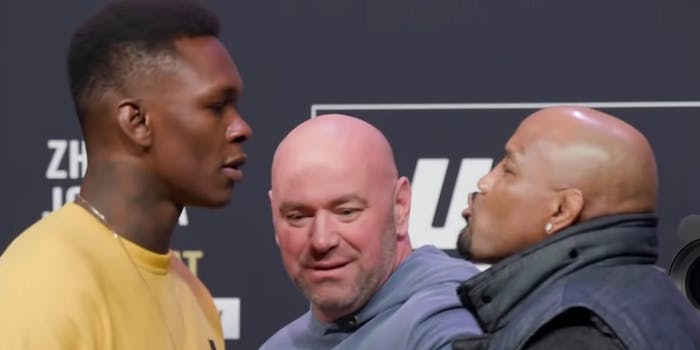 How to stream Israel Adesanya vs. Yoel Romero in UFC 248

Both are athletic marvels. And both are excellent fighters.

No fighters symbolize the evolution of MMA from spectacle to sport quite like UFC middleweight champion Israel Adesanya (18-0) and Yoel Romero (13-4), who will meet in the main event of UFC 248 on Saturday night on ESPN+.

When the UFC first appeared in 1993, many of its early stars weren’t really athletes. Some of these men, eschewing sporting virtues like fitness and flexibility in favor of more nebulous traits like toughness and guts, were just glorified bar brawlers and thrill seekers. Their presence and popularity helped to keep the line between cage-fighting and sport clearly delineated—and the UFC firmly in the cultural shadows.

But as no-holds-barred fighting developed into mixed martial arts in the late 1990s and early 2000s and the sport began to gain in popularity and cultural acceptance, athletes started to take over. Soon it wasn’t enough to be merely daring in a cage. You had to be skilled and physically adept, as well. Athleticism became as compulsory in the UFC as it was in the NFL or the NBA.

Now, forget for a second about Adesanya’s blinding hand speed and the sophistication of his combinations. Put aside his perfect spinning kicks and leaping attacks and his near-superhuman ability to dodge every punch that comes near him. Adesanya doesn’t even need to be in a cage to demonstrate his athletic genius. During the walkout to his fight against then-champion Robert Whittaker last October, the New Zealand native performed a choreographed dance routine with an impossible one-handed cartwheel from a nearly static standing position with the same calm with which a normal person would sit down in a chair.

It was a move many dancers couldn’t pull even off and he managed it just minutes before the most important moment of his professional life. But this is just like Adesanya. Since entering the UFC two years ago, he has done nothing but dazzle and win and expand the potential of the human body in a cage fight, making some of the greatest mixed martial artists in the world look like throwbacks by comparison.

But even if Adesanya beats Romero on Saturday night, he won’t ever make the Cuban look unathletic. The former Olympic silver medalist in freestyle wrestling has built a long career doing things with his body that are beyond the realm of possibility—perhaps further beyond than even Adesanya can go—from lifting opponents off their feet with one hand to leaping so high in the air to land knee strikes that he throws himself clear over peoples’ heads. Romero’s physical virtuosity is so remarkable even he can’t seem to contain it.

Like Adesanya, Romero is indifferent to keeping this physical exuberance locked inside the cage. Last month, during a press conference promoting their fight, Romero was goaded into an impromptu dance-off by Adesanya and shocked everyone in attendance by hitting a standing back handspring like it was nothing. In tight jeans, no less.

But most remarkable of all is that Romero does what he does at 42 years old, an age when most fighters are retired or punch-drunk cautionary tales. Adesanya may be the future of MMA but Romero is a one-man war against the tyranny of aging. And together they are the last nail in the coffin of the once- and long-fashionable idea that a man’s “spirit” is enough to see him through a fight.

Here’s everything you need to know to watch Adesanya vs. Romero.

UFC 248: How to watch Adesanya vs. Romero

Thanks to a huge seven-year deal, ESPN+ is now the only way to watch UFC 248 (and all subsequent UFC PPVs). The good news: ESPN+ is now your one-stop shop for the MMA promotion’s most important fight cards. Here’s how it all breaks down:

In other words, you can buy UFC 248 for a one-time price of $64.99, but if you spend only $20 more, you’ll also receive one year of ESPN+ to go with it. That’s a $50 value, and if you’re a big MMA fan, that’s a nice deal. Along with all kinds of exclusive live events (see below), you can also watch plenty of UFC Fight Night events every year with ESPN+.

If you don’t currently subscribe to ESPN+—which now boasts more than 6.6 million subscribers—you can purchase UFC 248 from your desktop or smartphone here. If you already subscribe, you can easily buy the PPV from the ESPN app by simply clicking on the event in the ESPN+ tab.

One thing to remember: Only the UFC 248 main event card will be featured on ESPN+, and you will have to pay the $64.99 PPV fee (full schedule and watch guide below). Here’s the main event card:

ESPN+ is ESPN’s subscription streaming service. It works as an extension of the ESPN app that you probably already possess on your mobile device. Have you noticed the live events, articles, or series tagged with a gold “E+” that resides in the corner of the app? Those are the events that are locked behind the ESPN+ paywall. It’s literally thousands of broadcasts per year, including the aforementioned UFC Fight Nights and a bunch of exclusive Top Rank boxing events. You’ll also get all of the best 30 for 30 episodes, daily MLB action, every out-of-market MLS game, international soccer matches, and more college sports than you can dream of.

In case you need a reminder: Your ESPN+ subscription will not allow you to watch the ESPN prelims for free. You’ll still need to have a cable or live TV subscription to view it on the network beginning at 8pm ET. Here are the matches you’ll be able to watch on ESPN: