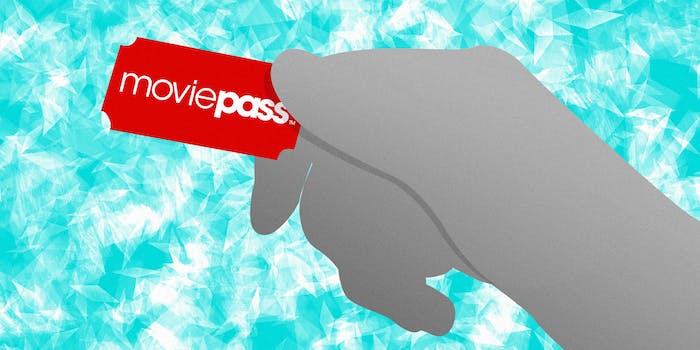 MoviePass is still worth every penny—here’s why

Depending your thirst for cinema, the issues might be worth your dollars.

How does MoviePass work, and is it too good to be true?

The service on July 26 ran out of money and then borrowed $5 million to keep the lights on. This has led to outages across the app. Then, in August, MoviePass announced it would begin limiting subscribers to only three films per month.  So… maybe it’s worth it. But maybe not.

Movie box office receipts have been stagnant for the last six years. Some blame streaming services for making it possible to watch nearly anything from the comfort of your own home—but ticket price is just as big a factor. The average cost of a movie across America is $9.16, but in cities like Los Angeles, it’s possible to pay as much as $18 per ticket before snacks. That’s why the subscription movie-ticketing service MoviePass is such an enticing prospect.

Unfortunately, the service has had a fraught existence, with changing rules and options, making it hard for new customers to understand. But depending on your schedule and thirst for cinema, there’s still a lot to love about MoviePass. Here’s everything you need to know before committing.

MoviePass is a subscription service. When you sign up, you’re sent a credit card that can be used to see movies in the theater without paying for the ticket yourself. There used to be two options for plans: Unlimited or Movie Pass. Unlimited subscribers could see one new movie every day, while MoviePass subscribers could see three movies per month. But beginning Aug. 15, 2018, there will be just one subscription tier where moviegoers can see three films per month.

Using the MoviePass app, subscribers can check theaters and showtimes in their area that support the service. When you find the movie you want to see go to the theater, check in with the MoviePass app and pay with your MoviePass credit card. With your ticket is in hand, you used to have to take a picture of it with the in-app camera to verify your purchase. But that requirement has been suspended.

MoviePass’ Unlimited plan previously cost $9.99 per month, with the ability to cancel at any time.

As of an announcement in August 2018, MoviePass’ Unlimited is no longer unlimited.. Now, you can pay $9.95 per month for three movies per month. MoviePass also said it would offer up to a $5 discount for those wanting to buy extra tickets. In its statement, MoviePass said the new plan “will include many major studio first-run films.”

On the plus side, MoviePass also said it would suspend Peak Pricing, where it used to charge subscribers an extra few dollars to see the most popular movies during the most popular viewing times. Want to see Avengers: Infinity War at 9pm on a Friday? You could have been charged up to $4 extra by the app.

Currently, your MoviePass cannot be shared by different people. Your account is good for you and no one else. However, the company has announced plans to introduce group plans this summer. In an interview with CinemaBlend, CEO Ted Farnsworth provided a brief outline of what to expect.

We’ve been working on that one for awhile. So that’s a family plan, and it’s also the ‘bring-a-friend’ plan … It would be the same [cost] that it is right now. We might do something down the road to get more of a discount for the family plan. … But it’s all the convenience of going with your family. You’ve got it all in one app, one card, one everything.

It appears that while the Family Plan won’t necessarily be cheaper, it will make buying multiple tickets with one card an option. Currently, a family that wants to use MoviePass needs a different account, card, and mobile device for each member.

How does MoviePass work?

When MoviePass started, subscribers could see any movie they wanted at supported theaters, though it was up to independent locations to determine if features like 3D were supported. At some theaters, for example, 3D movies are available, but the ticket holder pays an extra charge after swiping their MoviePass card. Still, the only hard restriction was that you could only see one movie a day.

Today, MoviePass has more rules—but it’s gotten cheaper. When the service launched, it was $30 per month. In August 2017, the price dropped to just $9.99 per month. The price drop made the new rules easier to swallow. Users can only see a particular film once, so if you’re looking to catch Deadpool 2 multiple times, you’ll be paying for the extra screenings. In addition, subscribers had to take pictures of their tickets to verify that they actually bought a ticket to the right movie, but with its new one-tier-only price structure implemented in August 2018, the Ticket Verification requirement was suspended.

Actually using MoviePass is a breeze. Open the app while you’re in line, select the theater and showtime you’re looking for, check-in, and then pay with your MoviePass card at the box office. It’s easy as can be.

Does MoviePass work as advertised?

We’ve used MoviePass around the country, in major chain theaters and independent cinemas, without a problem. Depending on where you live, your MoviePass can get you into the day’s hottest blockbuster or an independent double feature of classics. But that was before the company’s recent woes.

Some users have complained that the app is a hassle. You have to check in on an app at the theater before buying your ticket and you used to have to take a picture of your ticket after purchase. During the company’s recent crisis, many users reported problems with the app and entire movies being blacked out. MoviePass was basically unusable for about a week.

Frankly, it’s a little too early to tell if the company will rebound.

Launched in June 2018, ACM Stubs A-List is the movie theater company’s counter to MoviePass. For $19.95, subscribers can watch up to three movies per week, including IMAX screenings. More importantly, you can watch more than one movie a day, and you can watch the same movie as many times as you want—so long as you don’t go over your allotment of three total movies per week. (And no, those movies don’t rollover. Your limit will always be three per week).

Another key feature that sets it apart from MoviePass: You can reserve your seat in advance, and you don’t have to worry about surge fees. There’s just one catch: You’ll need to commit to at least three months of service.

When it comes to AMC Stubs A-List vs MoviePass, it’s a matter of preference and convenience. If If you have an AMC theater nearby and you value being able to reserve your ticket in advance, it might be worth it for you to pay an extra $10 per month, especially if you’re the type of person that indulges in multiple viewings of the same movie at the box office. But for most moviegoers, MoviePass’s $9.99 plan is hard to top.

Is MoviePass worth it?

Buying a MoviePass is not only worth the money, but in many cases, it’s financially responsible. A full price adult ticket might average $9 in America, but in cities like Los Angeles and New York City, you can easily pay $13 for full price ticket. Even if you see just one or two movies a month, MoviePass easily pays for itself.

We wish MoviePass allowed you to see movies more than once, especially when films like Hereditary demand multiple viewings, but that’s a small sacrifice to make. Given that the company is spending far more money than it’s taking in, MoviePass might not be around forever.

Jump on this opportunity to get your fill of the cinema before society returns to the dark ages. It might not be long before you have to once again pay for each movie you want to see.