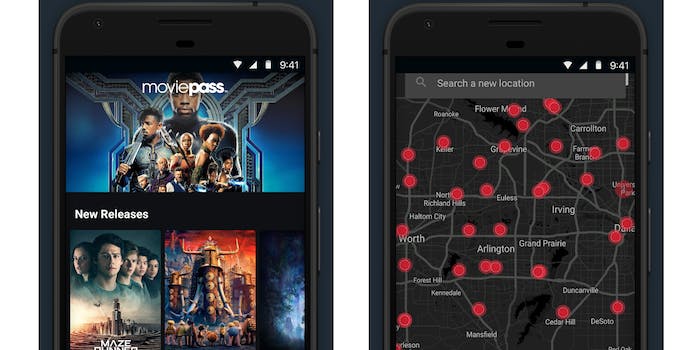 The app has a new plan.

It looks like MoviePass is cutting back on the feature that caused enrollment to skyrocket in 2017.

In an interview with the Hollywood Reporter this week, the company’s CEO Mitch Lowe explained that the app has switched to a four-ticket per-month limit, and hinted that the old plan may never return for new subscribers. On April 13, the company launched a special “promotion” where new subscribers would be restricted to four movie tickets each cycle, plus a three-month free trial of iHeartRadio’s All Access, instead of being able to see a movie in theaters every day for just $10 per month. MoviePass had tried similar bundle packages before, so the new ticket limit was seen as a temporary promotion—but now it seems this could be the app’s new membership model moving forward.

Is @MoviePass already ending the idea of 30 tickets for the price of one? https://t.co/MXXhBur3qA pic.twitter.com/GglgtrAAug

When the Hollywood Reporter asked Lowe if the “unlimited” plan would return, the CEO only replied, “I don’t know… We just always try different things. Every time we try a new promotion, we never put a deadline on it.”

In other words, maybe this introductory plan will stick. Or, if it doesn’t, maybe it’ll be replaced with another trial plan in the coming months. It’s too soon to say, apparently.

According to Gizmodo, the company had been “bleeding money” under the unlimited business model. Just last month, the company got hit hard in the headlines when it was revealed it was tracking users’ location and monetizing it. MoviePass’ stock price reportedly fell by more than 40 percent last week following a disappointing SEC filing, but then saw a little bump Thursday after Lowe’s comments went public.

It’s tough to say what the future of MoviePass membership holds, but if you were among the members who got to enjoy the unlimited plan while it lasted, consider yourself lucky.

Update 11:15am CT, May 3: The MoviePass unlimited plan has returned. CEO Mitch Lowe claims the company is “absolutely committed” to making sure it’s an option, and that it’s still “fine-tuning this model.”