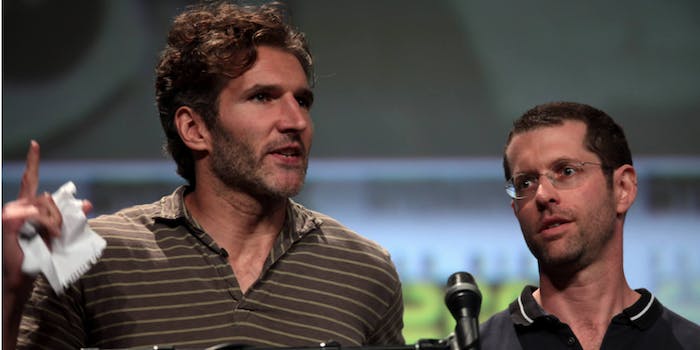 The project was apparently in the works before their Netflix deal.

showrunners David Benioff and D.B. Weiss have reportedly found their next project: an adaptation of the graphic novel Lovecraft.

According to Deadline, Benioff and Weiss have a deal with Warner Bros. to turn the 2004 Hans Rodionoff graphic novel into a film. A summary of the novel supposes that the horrific creatures H.P. Lovecraft created, like Cthulhu, are actually real, and the film will reportedly be set in the 1920s. Matt Manfredi and Phil Hay (Destroyer, The Invitation) are writing the script, and Karyn Kusama, director of those films, will executive produce.

In August, Benioff and Weiss landed a TV and film deal with Netflix, though that news wasn’t exactly well-received just months after Game of Thrones‘ disastrous final season. The two were also set to helm a new Star Wars project but dropped out around the same time they appeared on an Austin Film Festival panel and detailed how inexperienced they were at the beginning of Game of Thrones—and how they were still able to fail upwards.

Lovecraft adaptations have been popular lately: Richard Stanley’s Color Out of Space debuts in January and the J.J. Abrams/Jordan Peele-produced Lovecraft Country is slated for HBO in 2020. But Lovecraft’s history of anti-Semitic and racist views is also more well-known now; considering Weiss and Benioff were attached to HBO’s now-scrapped Confederate series, fan reaction to the news has been mixed.

Benioff & Weiss moving from a failed project about ‘what if the Confederates won’ to an HP Lovecraft adaptation… sure does say some things, doesn’t it

No cast or release date has been announced for this project yet.