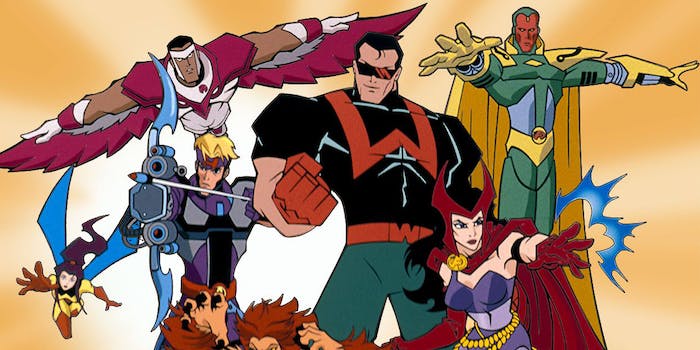 Two ill-fated cartoons from the pre-MCU days have landed.

Wouldn’t it be awesome if a vintage Avengers cartoon from that golden ’90s era of Saturday morning cartoons suddenly appeared on Disney+?

Though the tables have turned in recent years, with the Avengers becoming the undisputed face of the Marvel Cinematic Universe, in the ’90s, the X-Men were the most popular of the Marvel superheroes. And as such, their cartoon got the most resources and promotion. A Spider-Man animated series followed and is also fondly remembered.

And then there were these Avengers cartoons. They didn’t fare so well. In Iron Man, children were introduced to a back-up group of superheroes that helped Tony Stark do his thing, including Hawk-Eye, War Machine, and an alien named Century whose alter ego was a farmer. The show lasted only two seasons.

Avengers: United They Stand somehow fared worse. The cartoon was supposed to roll out in the mid-’90s around the time that the other cartoons were riding X-Men’s coattails. Instead, it didn’t come out until 1999, three years after Marvel declared bankruptcy.

And that is just the beginning of the problems with United They Stand. The cartoon also presented the Avengers in a way that had never been seen before, and that wasn’t a good thing. Iron Man was a teen. Scarlet Witch fought in her underwear. And it all took place in the future for some reason.

Though the series involved a lot of the creatives from X-Men behind the scenes, it never caught on with audiences in the same way. Avengers: United They Stand was canceled after just one season.

All good things must come to an end. But, bad things do too. And apparently, now they live on over at Disney+.