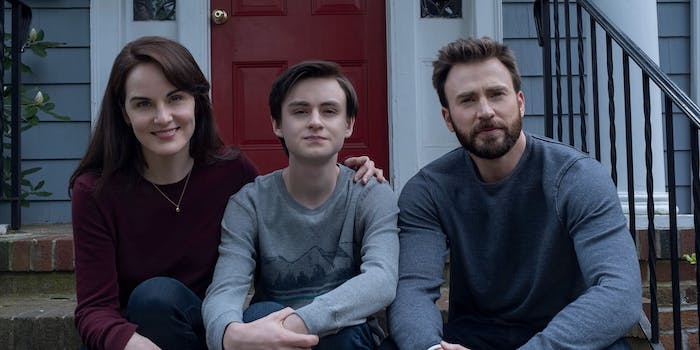 Chris Evans stars in this bland crime drama about a man whose teenage son is accused of murder.

In Defending Jacob, Chris Evans does not play a character so much as a crime TV mannequin, too dull and superhumanly handsome to be plausible as an Area Dad. Like so many other Apple TV+ products, this show is a bland facsimile of prestige drama.

RELEASE DATE: April 24, 2020
CREATOR: Mark Bomback
STREAMING: Apple TV+
Chris Evans and Michelle Dockery star in this unoriginal crime drama about a couple whose teenage son is accused of murder. A waste of star power with a bland script and a disappointing lack of thrills.
Advertisement Hide

Based on the novel by William Landay, Defending Jacob is a crime thriller about a prosperous suburban family whose life is torn apart by murder. Evans and Michelle Dockery (Downton Abbey) star as Andy and Laurie Barber, whose 14-year-old son Jacob (Jaeden Martell) is accused of stabbing another kid. As the local community turns against Jacob and his parents, the investigation is complicated by Andy’s role as the ADA—a job that the show’s writer doesn’t seem to understand. Andy acts more like a detective, visiting crime scenes and interrogating suspects instead of prosecuting people. On a basic procedural level, it’s pretty weak. Jacob is initially arrested based on fingerprint evidence, but do they explain why a kid’s prints are even in the police database? Nope.

I suspect that for Chris Evans, some of Defending Jacob‘s appeal lies in the fact that it takes place in his home territory of suburban Massachusetts. But to the audience, it could be set anywhere or nowhere. Every location is grey, pristine and generic, with the Barber family house resembling an uninhabited showroom. It’s eerily reminiscent of Quibi’s recent Most Dangerous Game reboot, which stars Liam Hemsworth as another unreasonably handsome-yet-tormented suburban dad.

Andy and Laurie lack distinctive personalities, with Evans and Dockery mostly focusing on looking worried while delivering stolid exposition. 17-year-old Jaeden Martell gives the most natural and compelling performance, convincingly twitchy as a teenager who could plausibly be a creepy murderer or just an awkward kid. Spread over eight episodes, we watch the Barbers grapple with the possibility that their son might be a killer—or he might not be, and still wind up in prison anyway.

The sterile aesthetic makes more sense when you learn that Defending Jacob was directed by Morten Tyldum, who earned an Oscar nomination for The Imitation Game before making the worst film of 2016, the comically sexist and overpriced Passengers with Jennifer Lawrence and Chris Pratt. Its lead characters were also oddly mannequin-like, combining flawless beauty with dialogue that no human would ever speak out loud. (This time we can blame the dialogue on blockbuster screenwriter Mark Bomback, who delivers a workmanlike rehash of hackneyed crime investigation tropes, using a courtroom Q&A as a framing device for flashbacks.)

With a couple of exceptions (Dickinson), Apple TV+ has built a brand around glossy, expensive dramas featuring A-list stars and minimal artistic merit. These shows feel like watered-down versions of something else, often with less sex, violence, or edgy themes than their counterparts on HBO and Netflix. In theory, Defending Jacob raises some interesting questions. Do we really know our own children? What do you do when you lose trust in the legal system? But after watching HBO’s excellent The Outsider earlier this year (a crime thriller where a local baseball coach is wrongly accused of murder), Defending Jacob looks like a Volvo commercial by comparison.

While it’s disappointing to see Chris Evans invest his time in such an unoriginal show, Michelle Dockery’s role is more frustrating: An utterly two-dimensional Worried Mom. Her narrative job is to be stressed and tearful while her husband does the real investigating. Her actual job is to run an implausibly chic nonprofit for underprivileged kids, a classic gender-normative career for a TV wife. By episode two or three, I was praying for a twist where she turns out to be the murderer instead.

As with a lot of Apple TV+ shows, you’re left wondering… what’s the point? Defending Jacob is competent enough to make you curious about whodunnit, but aside from Chris Evans’ exquisitely-trimmed beard and an admirable performance from Jaeden Martell, it doesn’t have much going for it. And we’re hardly suffering from a dearth of other crime dramas to watch instead.