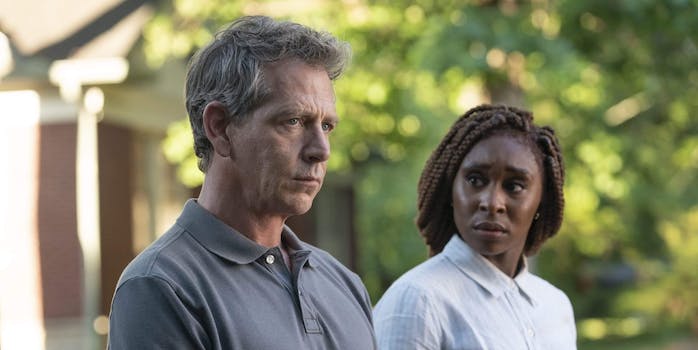 HBO’s ‘The Outsider’ is a simple yet gripping supernatural thriller

America loves to watch a sad middle-aged man solve crimes, and HBO’s The Outsider executes that well-trod formula to a tee. Adapted from the novel by Stephen King, it’s a small-town murder mystery with (of course) a supernatural twist. When a young boy is brutally murdered, the case initially seems like a slam-dunk for Detective Ralph Anderson (Ben Mendelsohn). The town’s beloved Little League coach Terry Maitland (Jason Bateman) clearly did it, as proven by overwhelming physical evidence and eyewitness testimony. But then Maitland provides his own airtight alibi: video footage and other reliable witnesses put him 70 miles away from the scene of the crime.

The Outsider’s trick is to give us a horror story populated by characters who behave like they’re in a typical crime thriller. Even if the Stephen King connection didn’t clue you in, it’s clear within a couple of episodes that something paranormal is going on. But Anderson and his fellow cops keep doggedly looking into forensic evidence and tracking Maitland’s whereabouts, unable to accept what the audience knows to be true: the “Terry Maitland” who murdered that kid must be some kind of magical doppelganger. It takes several episodes for anyone to even consider the possibility of a supernatural explanation, which is why this show works so well.

If you’re at all familiar with King’s work, you’ll recognize plenty of recurring themes. Family trauma. Small-town conflicts. Lurking entities that flourish in the midst of human suffering. Four Stephen King movies came out last year and there are three TV shows currently on air (Creepshow, Mr. Mercedes and Castle Rock), so it’s not as if these adaptations are thin on the ground. Primarily written by acclaimed novelist/screenwriter Richard Price (The Wire), The Outsider arrives in a prestige miniseries format, leaning away from the schlocky horror of more high-profile adaptations like It and Doctor Sleep. It’s positively normcore by comparison, with Mendelsohn giving an uncharacteristically subdued performance as Detective Anderson, a responsible figure who genuinely seeks justice, but trips up due to lingering grief from the long-ago death of his son.

The relationship between Anderson and his wife Jeannie (Mare Winningham) is a particular highlight, a realistic partnership between two people who value each other’s input, featuring (will wonders never cease!) an actress who actually looks like a normal 50-something woman rather than a glossily youthful TV Wife.

As the investigation progresses, shockwaves of grief and violence spread through the town. Anderson enlists the help of Holly Gibney (Cynthia Erivo), a brilliant investigator who is probably on the autism spectrum. I initially suspected she was an updated version of a more troublesome Stephen King cliché—mysterious Black people with quasi-superhuman powers of insight—but in fact, this character is portrayed as white elsewhere, appearing in several of his novels. At any rate, she’s an intriguing figure here, acting as a more sensitive foil to Anderson’s stolidly traditional police work. They thankfully avoid any intimation that Gibney’s investigative skills have supernatural origins, making it clear that her methods and worldview are the result of lived experience.

With an impressive roster of directors, including recent Emmy-winner Jason Bateman and the excellent Karyn Kasuma (Destroyer), The Outsider is a grisly slow-burn thriller that had me powering through my screeners at record speed. It does, however, suffer from a problem I’ve heard others complain of in Bateman’s other work, particularly Ozark. Far too many scenes are filmed in the dark. The actual, literal dark, meaning you can’t always see what’s going on. The dread-inducing soundtrack does a lot of heavy lifting during the murkier moments, but I still can’t fathom why this persists as an intentional creative choice. Sure, The Outsider follows an unusually realistic tone for a supernatural drama, but couldn’t they stretch their artistic license to include some better lighting?

Like the first season of The Terror, this feels like a horror story designed to lure in viewers who don’t think of themselves as horror fans. As someone who actually is a horror fan, I found it refreshing. The Outsider doesn’t seem embarrassed of its supernatural doppelganger concept, it just takes a long time to get there. While the show doesn’t make any especially bold artistic choices, it’s a gripping and mature example of a we-know-whodunnit crime thriller.

The Outsider begins on HBO on Jan. 12.