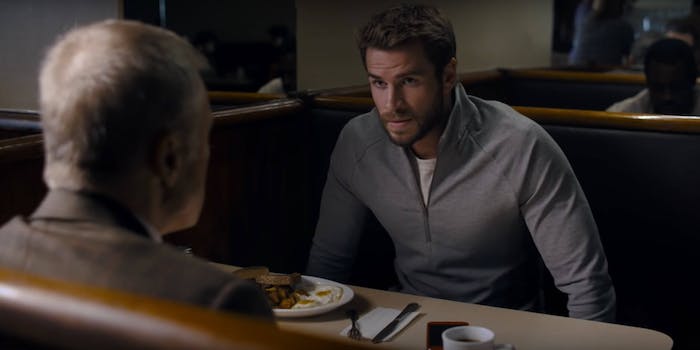 Quibi’s ‘The Most Dangerous Game’ remake is a dud

Quibi's serialized format makes this generic action thriller feel even slower than it is.

Quibi’s entire model relies on the assumption that people don’t have time to watch TV, an idea that was already dubious six months ago, and feels morbidly ridiculous now that everyone is quarantined indoors. Audiences are looking to marathon more TV, not watch movies in efficient 8-minute chunks. But that’s what Quibi is giving us, and we must judge the app’s material on its own merits.

The Most Dangerous Game

RELEASE DATE: April 6, 2020
DIRECTOR: Phil Abraham
STREAMING: Quibi
Liam Hemsworth stars in this generic action thriller about a man who agrees to be hunted for sport in exchange for a massive payout. Quibi’s serialized format does nothing to help its boring production design and unnecessarily slow pace.

In a launch slate including such mindboggling titles as Murder House Flip (a home renovation show for homicide scenes) and Dishmantled (a cooking show where food is fired into the chef’s face by a cannon), Quibi’s Most Dangerous Game remake is one of the more serious projects. Liam Hemsworth stars as a terminally ill man who agrees to be hunted for sport, with Christoph Waltz as the rich facilitator who organizes the hunt. We’ve recently seen several new riffs on this idea (including last month’s The Hunt), and Quibi’s version is less exciting and less socially conscious. Dodge Maynard (Hemsworth) is meant to be “poor,” but he’s like… Hollywood poor. He’s a hunk who lives with his gorgeous wife in a pristine suburban house, and his money troubles stem from his failure to sell a skyscraper that he owns. Yes, our underdog hero is a chiseled, tailored-suit-wearing real estate guy. So while he’s risking his life to avoid hideous medical debts as an uninsured American, the execution is nowhere near as effective as the edgier political commentary of The Purge.

Politics aside, The Most Dangerous Game just isn’t much fun. The main characters are hopelessly generic, and the pacing doesn’t work for a serialized drama. In a normal two-hour action thriller, it would be perfectly acceptable to have 30 minutes of set-up before we get to the manhunt. But if you’re watching in daily 8-minute segments, then it feels like a total drag to wait four whole episodes for the action to start. Especially when the basic premise could easily be explained in 90 seconds. If I’m signing up for “quick bites” of entertainment, someone better get stabbed within the first five minutes.

Along with the micro-serialized format, Quibi’s other gimmick is that you can watch any of its content in portrait or landscape mode on your phone. This option wasn’t available to me because the screener app only worked for iPhone users, so I watched the four available screeners in regular ol’ laptop mode. But I doubt a different format would’ve changed things much. Written by Nick Santora (Prison Break) and directed by Phil Abraham (The Sopranos), The Most Dangerous Game is deeply forgettable, right down to the blandly showroom-perfect production design. Maybe it picks up once the real action starts in later chapters, but why bother when there are so many good action movies available elsewhere?