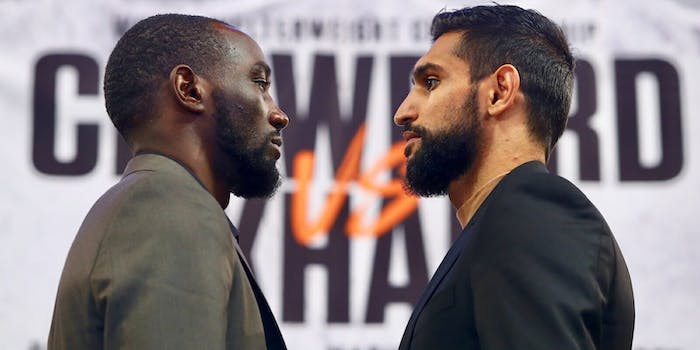 How to watch Crawford vs. Khan online

One of the best fighters in the world takes on a former champion.

Terence Crawford, thought by many to be the best boxer in the world, gets another chance to prove it on Saturday. His opponent, former world titlist Amir Khan, gets another opportunity to show he can beat a top fighter. Simply put, the Crawford vs. Khan fight is still a must-watch PPV for any boxing fan.

Khan is convinced he can pull off the upset and take Crawford’s 147-pound welterweight title. Crawford, meanwhile, wants to add to his already impressive legacy while trying to convince Errol Spence to meet him for boxing’s biggest mega-fight. It should be an exciting bout for however long it lasts.

Even if you’ve cut the cord, you can still watch the ESPN-branded PPV.  Here’s all you need to know to live stream the Crawford vs. Khan PPV bout.

Crawford vs. Khan live stream: How to watch online

If you want to watch the Crawford vs. Khan live stream, you’re going to have to pay $69.99 for it in HD (or $59.99 in standard definition). There is no legal way to take it in for free. But you also don’t have to have cable or satellite to watch.

Sling TV is the leader in live TV streaming, and it’s the only service that also offers rentals and PPVs. You’ll need to be a Sling TV customer to order the Crawford vs. Khan PPV, but there’s good news on that front: You can get started with a one-week free trial, and right now the company is offering 40 percent off your first three months. That means Sling TV’s two basic packages, Sling Orange and Sling Blue, will be just $15 per month for that period, and Sling Orange + Blue (seen above) will be just $25 per month. The PPV is available to buy on the “Rent” tab of the Sling TV guide. Once the fights start, it will be available in both the “Guide” and “On Now” tabs. The added bonus from Sling TV is that you’ll also be able to watch rest of the undercard that will be headlined by Carlos Adames vs. Frank Galarza, beginning at 6pm ET on ESPN2.

If you want to purchase the card at TopRank.com, hit the “Buy now button,” and you’ll be asked to register on Fite.TV, the promotion’s streaming PPV partner. Once that’s done, you can complete your purchase. Aside from watching the card on your computer or your mobile device, Fite.TV is also available on PlayStation 4, Apple TV, Roku, Chromecast, and Amazon Fire TV devices.

To stream the rest of the undercard, you’ll need either ESPN2 or ESPN Deportes. You can stream it via Sling TV (as noted above),  Hulu with Live TV,  YouTube TV, DirecTV Now, or PlayStation Vue. All of these services should allow for at least a one-week free trial. Remember, this is just for the early undercard fights.

Crawford vs. Khan: Why it matters

Khan (33-4, 20 KOs), though, should be a tougher opponent for Crawford than Crolla was for Lomachenko. Khan has a solid résumé, beating Hall of Famer Marco Antonio Barrera, Marcos Maidana, and Zab Judah. But whenever he faces a top opponent in his prime—somebody like Canelo Alvarez or Danny Garcia—he usually loses.

Yet, he gets to be on the main stage again on Saturday.

“It’s just amazing for me to be in this position once again,” Khan said. “That itself is a great motivation for me, to know that I’m fighting the best out there once again. And it makes me train harder, work harder, and focus on this fight. I know that I can’t make any mistakes in this fight because I could be [in] trouble.”

Take for example the Alvarez fight in 2016. Khan was performing well through the first half of the fight and had won at least a couple of rounds from Alvarez. Then, he made a mistake and this happened.

Keep in mind: That fight was waged at 154 pounds, well above Khan’s best weight. Now, he’s back at 147 pounds vs. Crawford—who moved up from 140 pounds only two fights ago. But as good as Alvarez is, Crawford arguably has a little more talent. Alvarez is one of the best fighters of his generation. Crawford might be good enough to be one of the best fighters in decades.

“Anyone who knows anything in boxing knows a Terence Crawford comes along very seldom in a generation,” his promoter Bob Arum said. “Terence reminds me of Sugar Ray Leonard. … Terence is really something special … I am really looking forward to performances by two great fighters. A generational talent in Terence Crawford, and one of the great fighters I’ve seen in Amir Khan.”

“Amir Khan is a great fighter,” Crawford said. “I can’t take nothing away from. He’s done a lot in the sport of boxing. He has a big name. He’s undefeated at the welterweight division. So why not take another step up?”