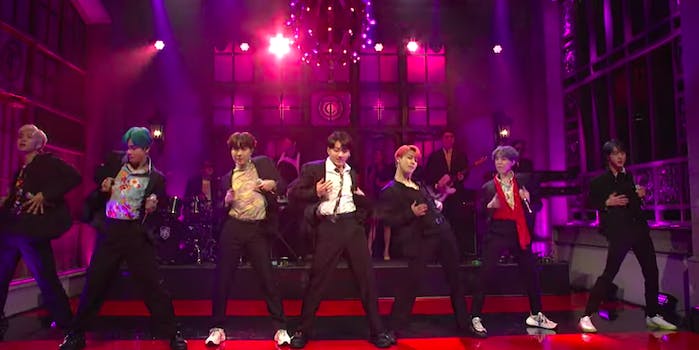 'The one with pink hair is adorable.'

After weeks of anticipation, K-pop boy band BTS finally made its debut on Saturday Night Live.

The seven-member group performed on the heels of the release of their highly-anticipated album, Map of the Soul: Persona.

Fans have been camping out at 30 Rock, trying to score tickets to the show, according to Billboard; the BTS fandom, aka the ARMY, is no joke. Host Emma Stone and the women of SNL alluded to BTS-mania in a teaser for the episode.

People were absolutely living for Jimin.

@SPICYMYG wrote, “Locals asking who the boy with the pink hair is and the boy with the blue hair is made my night,” referring to people who weren’t hip to the BTS craze before Saturday night.

“So the blue haired guy from BTS is hella pretty but the one with pink hair is adorable and i hear sum,” wrote @Nichole.

So the blue haired guy from BTS is hella pretty but the one with pink hair is adorable and i hear sum pic.twitter.com/pWuYxpO8pb

“Is the cute guy with the pink hair on snl (i have been informed by fans his name is jimin) like the king of kpop or sumn like that ?” @silkcosmos asked. “i need answers people.”

@Offwhiteferrari is curious about Jimin, too, tweeting, “also the guy with the pink hair just a crumb pls sir.”

It’s been a big week for BTS, and for K-pop overall; girl band Blackpink made their debut at the Coachella Valley Music and Arts Festival in Indio, California this weekend, too.