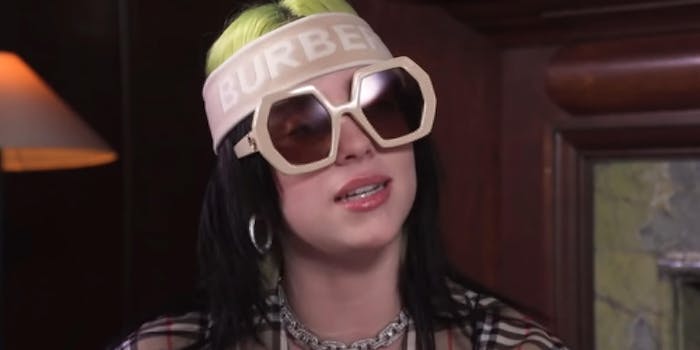 Eilish said she 'should have stopped long ago,' but wanted to stay connected to fans.

Billie Eilish says she’s stopped reading comments on social media “because it was ruining my life.”

In a recent BBC Breakfast interview, Eilish and her brother/producer Finneas spoke at length about the new Bond theme song, but when asked about whether she still reads comments on Instagram, where she has more than 54 million followers, Eilish says she stopped reading them “literally two days ago” and that “The cooler the things you get to do are, the more people hate you.”

“The internet is a bunch of trolls,” she added. “And it’s like, the problem is, a lot of it’s really funny.” Finneas chimed in: “Largely it’s a lack of accountability. I think even if it’s your own face in your profile picture, and it’s your own name, everybody’s much braver behind a cellphone screen than they would be walking down the street.”

It’s easy to see why Eilish would want to log off: People had opinions about her being to young to sing the Bond theme song, turning 18, winning Grammys, making a face at the Oscars, being friends with Drake, not knowing about Van Halen.

“It’s insane that I even have been reading comments up until this point,” Eilish said. “I should have stopped long ago. It’s just the problem is I’ve always wanted to stay in touch with the fans and keep talking to them, and people have ruined that for me. And for them.”

Eilish addressed the negativity in an Oscars post on Feb. 10. The post’s caption has now been edited to say “thank u oscars for having mee” but originally included a sentence about anticipating people picking apart her Chanel red carpet look.