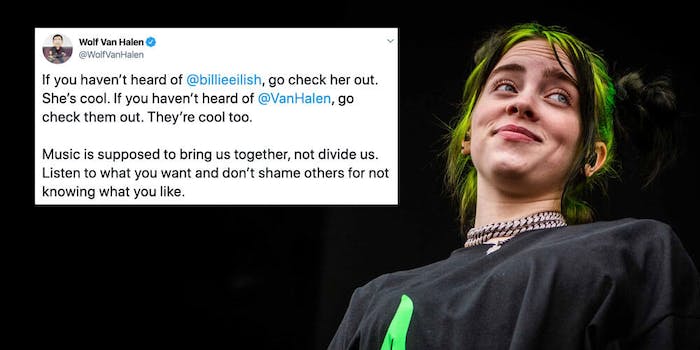 Van Halen had a wholesome response in defense of Billie Eilish

Van Halen came to the defense of Billie Eilish this week after the pop star received criticism online for not knowing the iconic rock band.

During an interview on Jimmy Kimmel Live! last month, the 17-year-old singer was quizzed on numerous artists from the 1980s and admitted to not knowing Van Halen.

The incident led to a wide range of reactions online, with many attacking the young songwriter for failing to know the legendary group. Others, including Kimmel himself, sided with Eilish and pushed back on her critics.

“If you asked me questions about 1943, I probably wouldn’t know the answers either,” Kimmel said at the time.

When Van Halen began trending on Twitter due to the interview this week, Wolfgang Van Halen, the band’s bassist and son of guitarist Eddie Van Halen, stepped in with a wholesome response to the debacle.

The 28-year-old bass player also urged music fans not to “shame others for not knowing what you like.”

“Music is supposed to bring us together, not divide us,” Wolfgang added.

Music is supposed to bring us together, not divide us. Listen to what you want and don’t shame others for not knowing what you like.

Some Van Halen fans didn’t take kindly to the bassist’s stance, arguing that the new generation of musicians do not not even play “real instruments.”

Wlof, what On Earth are You talking Abou???t today's Kids just listen to Sampler Pads;; dont play No ""Real Instruments!"; they dont Know the classics (V Halne, Stones, Hard rock, Iorn Maiden) Should be taught in school )if you Ask me DAMN STRAIGHT,,, makes me Sick to my Stomac

Despite the detractors, other fans appeared to be supportive of Wolfgang and the band’s kind words towards Eilish.

Van Halen, who in 2007 was inducted into the Rock & Roll Hall of Fame, has sold more than 80 million albums worldwide and received a Grammy for best hard rock performance in 1991.

Eilish recently became the youngest artist ever to be nominated for Grammys in the four major categories, including best album, song, and new artist.