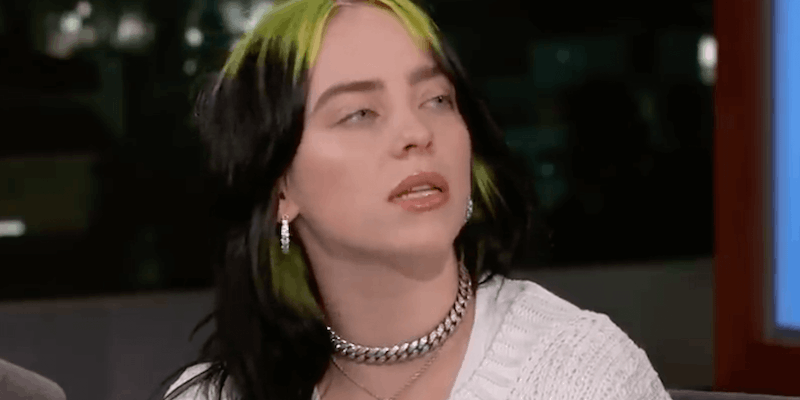 Should a teen pop star know anything about a rock band from the '80s?

Should a teenaged pop star know anything about an ’80s rock band? What should a 17-year-old know? These are the hard questions after pop superstar Billie Eilish told talk show host Jimmy Kimmel that she didn’t know anything about the popular hard-rock act Van Halen.

Van Halen, which peaked commercially during the early to mid-’80s, ranks among the best-selling artists in the United States. The “Jump” and “Hot for Teacher” band has sold 56 million albums in the U.S., and more than 80 million worldwide.

The “Bad Guy” singer is the youngest artist to ever be nominated in the four major Grammy Awards: record of the year, song of the year, album of the year, and best new artist. However, she was only born in 2001.

On the Nov. 22 episode of Jimmy Kimmel Live!, the host told the singer that he was 17 in 1984 and proceeded to quiz her on famous artists of the ’80s. Madonna and Cyndi Lauper? Check and check. Van Halen or legendary hip-hop trio Run DMC? No dice.

Kimmel defended her lack of knowledge during the interview: “If you asked me questions about 1943, I probably wouldn’t know the answers either.”

Once the video hit social media—throwing Kimmel’s defense to the side—opinions arrived from all directions on what exactly she should and shouldn’t know, given her age and profession.

Some have commented from the premise that Van Halen should be something constant, or near-universal, to the point that a 17-year-old singer should have a broad awareness of the band. This notion, or rather a rejection of it, might’ve caused hurt feelings.

Sorry, she works in music and claims to be skilled and innovative in the craft. She should know who they are. There are 5 year olds who know music from Van Halen’s high era. 3 yr olds who dance to Michael Jackson. She probably only listens to hip-hop and pop.

Some “stay off my lawn” types have even taken to directly bashing her, her music, even Interscope, her record label.

Her sound's banality and her crafted image are practically poll-driven this doesnt shock me. Not all listeners need or even want substance. Just some variety. She and Interscope provide them that safe space.

That’s what’s wrong with many people of today’s generation, they’re like fast food consumers, only care about what’s “at their peak” to follow the trend, but have no musical background, I’m not saying she has to know all VH’s discography, but at least know the name!

Then, you have a more reasonable reaction based on the realities for today’s teenagers. Why would she know who Van Halen is?

Any time a young celebrity says they don't like/don't know who a certain artist from before their time is, people flip out

Billie Eilish was born in 2001. How the fuck would she be expected to know who Van Halen is?

Let's get mad because she never watched Dawson's Creek, either https://t.co/cQx4izRDdN

To fellow Gen Xers upset Billie Eilish never heard of Van Halen — if boomers didn't shove their garbage music down our throats throughout the 80s, how many geezer bands could you name? I envy her!

OK, I am not a huge fan of Billie Eilish but she is 17 freaking years old! Why in the world would she know who Van Halen is? Her music is nowhere similar and they have nothing new. I learned who Tina Turner was at age 14 when "What's Love Got To Do With It" was released.

I love old school Van Halen but I honestly can’t work up outrage that someone else doesn’t know who they are. All my outrage is busy on things that fucking matter

Journalist Drew Magary noted the greatest of ironies related to Van Halen bandleader and guitarist Eddie Van Halen—he probably has never heard of Billie Eilish either, or anyone else for that matter.

If you're surprised Billie Eilish has never heard of Van Halen, well then you might be a LOT more surprised by the shit Eddie Van Halen himself is oblivious to. (via @CKlosterman) https://t.co/4yeJMj2ngQ pic.twitter.com/HGmpCkxYal