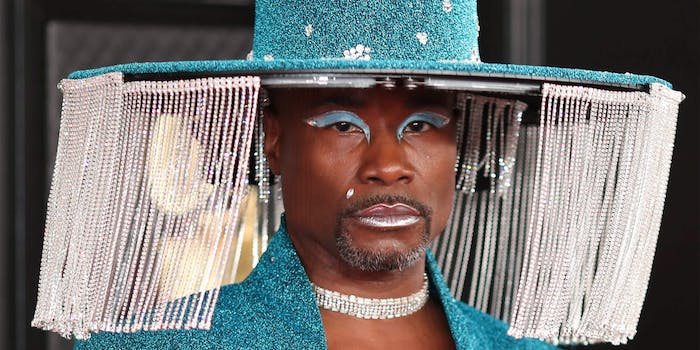 The 2020 Grammys were a study in contrasts.

It was the exciting new artists (Billie Eilish, Lil Nas X, Lizzo, Rosalía) versus the OK boomer quota-filling (a trainwreck Aerosmith performance, a chaotic cover of Fame‘s “I Sing the Body Electric”), adding some cognitive dissonance to the show. But it also marked a shift the Grammys are going to have to make to be taken half-seriously, especially as platforms like TikTok are recontextualizing the radio hit, and the charts.

Eilish was the night’s big winner, despite her on-camera protest, taking home five Grammys and making history as the youngest person to do so. In (one of) the acceptance speeches, brother/producer Finneas said they weren’t making music to win Grammys; they made music about “depression and suicidal thoughts and climate change.”

On that point, the Grammys were decidedly somber, clouded by the tragic death of Kobe Bryant and eight others just hours before. But at least we had memes to comfort us.

Billy Porter was one of the night’s most memorable, thanks in part to this incredible hat/meme template.

Me once Beyoncé gets up to use the bathroom leaving her laptop open thinking I was just a lamp pic.twitter.com/OZyhiP9Zwv

Me getting ready to reply, “per my last email” pic.twitter.com/ug5QhXwQqd

when someone mentions potato skins pic.twitter.com/CXLgK23Nyr

Billie Eilish also got the meme treatment for giving off some Mortal Kombat vibes.

The superhero/villain theme applied to other memes, as Lil Nas X and Ariana Grande were roped into an aspirational Power Rangers reboot.

This is the Power Rangers reboot I want pic.twitter.com/Blwx3LShi2

Tyler the Creator got some Grand Budapest Hotel jokes for his red-carpet outfit.

After winning best rap album for Igor, Tyler called out the Grammys for how it historically categorizes certain artists, saying, “Half of me feels like the rap album nomination is like a backhanded compliment.” He also called out a random Twitter user who told him in 2011 he’d never when a Grammy. Stay petty.

I FAVORITED THIS 9 YEARS AGO JUST FOR THE MOMENT TO TELL YOU I GOT ONE. YES IM PETTY AS FUCK, GOOD DAY MARK. https://t.co/WfU85JeHEj