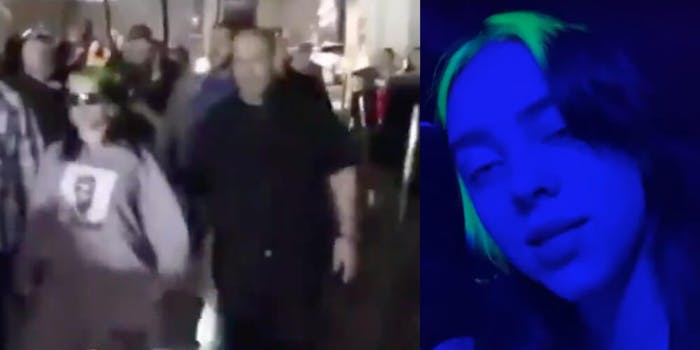 They also booed her and compared her to Lorde.

Billie Eilish is setting the record straight about a paparazzi video recently posted, showing people booing her as she appeared to ignore them after leaving Jimmy Kimmel Live.

The Grammy-nominated teen was headed to a rehearsal and says she stopped to talk to some fans who had been waiting for the chance to see her after the show.

“I went to the left side, I walked all the way over to them, I hugged them all, I did pictures, I talked to them for a second,” she said in an Instagram story.

Eilish went on to explain that she didn’t sign anything, because after learning that so many people–”eBayers”–just turn around and sell her autograph online, it became a policy to just talk to fans and take photos rather than put pen to paper.

“I’d way rather get a hug and talk to you … than fucking sign something so you can sell that shit,” she explained.

So when the singer headed over to another group she thought was made up of fans, she says she quickly explained that she wasn’t going to sign anything. And that’s when she started to realize that, even though they had all been shouting her name to try to get her attention, this group was made up almost entirely of paparazzi and eBayers rather than her fans.

“I didn’t want to be disrespectful at all, so I went up to them all and I tried to get hugs, or you know, I tried to touch all their hands … nobody put their hands out, nobody tried to hug me back,” she said.

And that’s when the expletive-filled crowd turned against her, as seen in the video.

.@BillieEilish addresses the paparazzi and “E-Bayers” who boo’d her, called her a “little bitch” and compared her to Lorde after she made it clear she didn’t want to sign autographs.

Billie does not sign products/pictures after learning that people sell them online later. pic.twitter.com/TOiNpNAwYh

“As I started to walk away, back to the car, they all started to boo me. And then they all started calling me a little bitch, and I’m going to lose my Grammy nominations,” Eilish recounted. “‘Oh, what a little fucking…’ whatever, and cursing me out and shit. Damn, dude.”

She said they tried to goad her into returning to sign autographs by claiming Lorde would have stopped.

“Like, the fact that people can switch up like that, damn. Like, wait outside for you and then immediately they don’t get what you want and they boo you and fucking curse at you. I’m like, bro, I’m 17,” she said.

Everyone knows the paps will keep doing what they do, but at least in the age of social media, it gives celebrities the opportunity to push back when they go out of their way to make them look bad. And in Eilish’s case, she definitely got the last word on the matter.

“And to the grown men that booed me and called me a little bitch, I hope the best for you. I hope you can find someone else that you can use to make money off of and belittle,” she said. “All the best! Love you, paparazzi!”