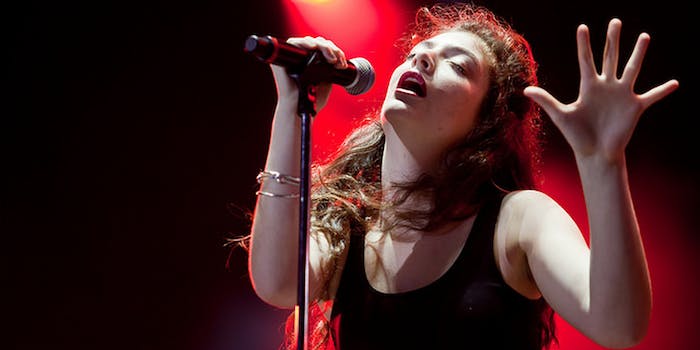 The singer claims he's been stalking her and subjecting her to “extreme fear."

New Zealand singer Lorde recently expressed her disapproval over the scourge of celebrity Photoshopping on Twitter. Over the weekend, she called out another menace to the entertainment industry: paparazzi.

More specifically, she essentially doxxed a New Zealand photographer named Simon Runting, whom she claims has been stalking her and subjecting her to “extreme fear.” She linked to his Facebook page, and provided a photo.

this man has been stalking me, photographing me and refusing me privacy. i am scared of him. he frequents central akl pic.twitter.com/RGv39ESELV

his name is simon runting. he took these photos of rihanna at her hotel last year. pic.twitter.com/witARDCHym

this should not be an accepted standard for young women or anyone in this industry. pic.twitter.com/JYtURQ2Ara

i understand that this comes with the territory. i do not understand why I should be complacent.

Rihanna expressed her feelings about the same photographer on her Instgaram last fall, when he captured her without makeup on a hotel balcony. Runting was also part of a lawsuit filed by New Zealand entertainer Michael Hosking, after Runting took photos of his infant twin daughters with their mother, without her knowledge.

After Lorde’s tweets starting circulating, so did the hashtag #StopSimonRunting, pushed along by her fandom.

Can we get a restraining order for Ella ASAP #StopSimonRunting

While the thought of angry Lorde fans tracking down Runting, Kill Bill-style, is quite entertaining, she’s making a bigger point about the 24-7 surveillance that’s become the norm in the entertainment industry, with sites like TMZ turning celebrity-hunting into a real-time sport.

Lorde’s self aware enough to admit this “comes with the territory,” but it’s also easy to forget she is only 17, which makes the stalking even more unsettling. Still, she’s calling out problems that celebrities twice her age are not.

As of today, Runting has not issued an official statement.

H/T The Wrap |Photo via lilianecallegari/Flickr (CC BY 2.0)