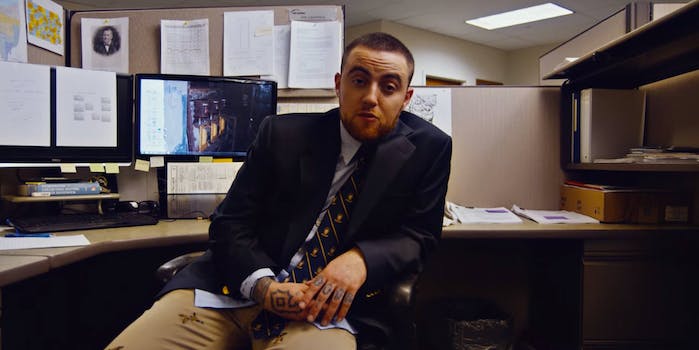 Mac Miller hits the reset button with ‘GO:OD AM’

These days, when a 16-year-old wants to start rapping, they put their music online for everyone to see. This can invoke both violent criticism or massive praise right off the bat. If you’re lucky, no one will hear it.

For Mac Miller, the middle-class weed and skateboard enthusiast, a whole lot of people heard the teenage raps he’s since distanced himself from.

Miller’s breakout came with 2010 mixtape K.I.D.S., made when he was still in high school, right after he signed with fellow Pittsburgh rapper Wiz Khalifa’s independent label Rostrum Records. Miller connected with the college audience that was embracing Khalifa, even selling more albums than he did independently before he went major. Similarly, Miller just inked a deal with major label Warner Bros. for his newest album, GO:OD AM.

This is Miller’s third studio album and shows the continued maturation of the now 23-year-old rapper. His first album sold well—it was the first independent album to debut at No. 1 on Billboard charts since Tha Dogg Pound’s Dogg Food in 1995—but critically, it wasn’t well-received. His second album found Miller experimenting with his sound, breaking away from the frat rap he openly courted earlier in his career. He often disguised his voice by artificially deepening it, as well as producing a chunk of the album himself, trying out different beats. On GO:OD AM, Miller doesn’t produce any of the tracks nor does he change his voice. In fact, he actually sings.

Miller has made producing more than just a hobby for himself, but he’s still better at picking out beats than creating them from scratch. GO:OD AM is almost inarguably Miller’s best-sounding album and by far his most musical. Sounwave, the Los Angeles-based producer who had a hand in the nouveau West Coast sound of Kendrick Lamar, contributes the jazzy instrumental for the downtempo Ab-Soul collab “Two Matches.” Sha Money XL, the former G-Unit producer and New York native, does the next song. That covers both cities Miller has moved to since he found success. He’s looking to leave behind some of the vices that his time on the West Coast provided him, and his East Coast roots color the whole album.

As a teenager, Miller sampled New York legends Nas and Lord Infamous. Back then, his voice was thin and too puerile to worry about complex internal rhyme schemes. On GO:OD AM, the cigarettes and weed smoke have added proper bass to his vocals, and at some point between his early fame and now, he consciously started upping his writing game.

It might’ve been the poor reviews, the commingling with more advanced rappers like Earl Sweatshirt, or it could just be a result of growing up. In any case, there’s more than a few lyrical miracles, and even on tracks where there aren’t, Miller shows he can carry a song with just his personality, like on the spaced-out “Clubhouse.”

Not every form that this newfound confidence takes is a progression. A couple of times, he tries to dabble in a version of Atlanta-type turn-up music that fits him like a thrift store tuxedo. Miller sings on the record, like on the song “ROS,” where he’s on some straight-up lounge singing. It’s not as bad as it sounds: The “My Boo” echoes that appeared in Ciara’s “Body Party” a couple years ago bring enough dulcet tones, but it is a bit of an anomaly in the tracklisting. It’s the one love song of the 17 tracks.

His notions of romance are all over the place. He raps about a girl leaving him, begs her to start a family, and calls her pussy a “palace.” And that’s just on “ROS.” Elsewhere, he mostly refers to women as crazy and untrustworthy bitches, even as he’s been in a strong relationship with one for the past seven years.

It’s here that much of his leftover immaturity comes out. Miller has also spoken lately more about being a white dude in an industry dominated by black people, but shows he still has a way to go on that front. On the chorus of “In the Bag,” he unironically raps, “This the kind of music that make white people mad,” and on “Break the Law,” he encourages listeners to do just that with no acknowledgement of how said law might treat the black rapper providing ad-libs (Three 6 Mafia’s Juicy J) differently than him.

That’s all small potatoes, though, especially when the bar’s been set pretty low for white rappers. This is an album that displays a lot of growth and not just potential for such, like his past couple projects. Miller is exposing his voice and embracing his position in life. It’s obvious that he did not just want to be off in his own lane as the independent white rapper, regardless of whether he could make that more or less popular than Macklemore.

A rapper can have both the marketability to appear on Ariana Grande’s three-times-platinum single “The Way,” while also eschewing hits in his solo music so much that no song he’s released since 2012 has even cracked the Billboard Hot 100. He can bring all of his idiosyncrasies together, like when his “Bad Boys for Life” interpolation seamlessly transitions to a short poetic intro from Internet iconoclast Lil B. Chief Keef goes right along with Miguel.

Mac Miller still has a lot more growing up to do, but he’s finally at a place where he seems comfortable with his commercial and critical success. Luckily, he’s got a lot of both right now.