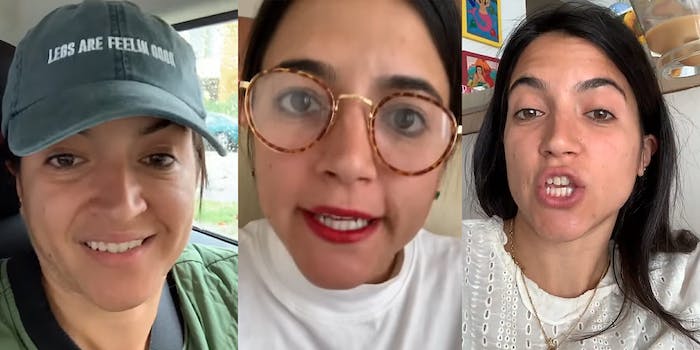 The comedian's AOC and mom impressions come from the same place.

It was a perfect intersection of pop culture and politics: AOC had just met with the cast of Netflix’s Queer Eye, and Limperis had been told for months how closely she resembles the House representative from New York. She saw her chance.

“I’ve really been waiting because she’s so amazing and wonderful and a person who can save us,” Limperis tells the Daily Dot. “I’m really not wanting to offend her or be negative towards her. She was a hard person to do an impression of for a while.” But Limperis studied her voice and her hands. The uncanny resemblance is “kind of like a gift.”

Limperis certainly has a gift for character work. Before this more realized AOC (she’d done a looser impression in January, sans red lip) the comedian was perfecting impressions of her mother in various situations: visiting L.A. (where Limperis recently moved), New York City (where she used to live), getting ready for Christmas, and going on vacation. The impressions are delivered via Limperis in a shaggy brown wig, with the quick-fire cadence of an East Coast mom, though she says the “through-line” is a “mom who’s over-the-top kind and loving and attentive.” It echoes Bob’s Burgers star John Roberts’ now-classic series of mom videos, which were a tribute to his Brooklyn-born mother.

“I think my main goal with all of my characters is to show love,” she says. “Even my mom character, I never want anyone to leave those videos being like, ‘Oh, she really trashed her mom.’ …I always want to show these characters through love.”

Adding another layer of love to the process, Limperis says her mom films and helps edit the videos, and offers input. She started filming the impressions shortly after her father passed away in 2015 and the two were living together in New York City. Limperis says spending more time with her mother as an adult—while they were caring for her father and after his death—gave her a little more insight into her personality. The process of creating the videos together “has been a real light” for both of them, she says.

Limperis, who co-hosts the mental health podcast Crazy; in Bed, doesn’t really do celebrity impressions. Her other character work is more specific. “A lot of them are parts of myself,” she says, but they’re also more universal, like “Woman at Lunch Who Can’t Tell a Story.”

“So much of adulthood is just listening to stories that kind of go nowhere,” she says. “As adults we get put in a lot of awkward situations.”

Limperis got to evolve her character work for Conde Nast’s the Scene, where she was able to use her background in sketch and improv to create short character-driven videos and “relatable content” for a bigger audience and figure out what landed and what didn’t. She cites Hulu’s Pen15 as a more recent example of character work that is lived-in and authentic: “There’s no winking, they are these characters. You never once for a minute don’t believe that they are these people. That, for me, is a stamp of great character work.”

Limperis says more AOC might be coming and there’s a “pilot written about this mom character,” but cites the bigger effect of character immersion, one that can be seen in the largely positive comments on her videos: “I’m so drawn to character work because it feels like a little bit of a joyful escape from a tough stretch of American history.”