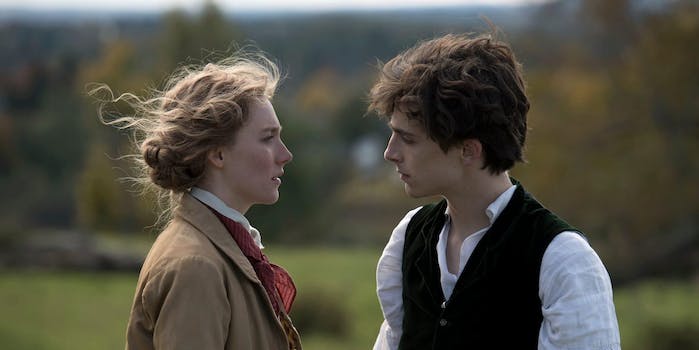 Why do the Golden Globes keep sidelining women filmmakers?

Where are the nominations for 'Little Women,' 'Booksmart,' or 'A Beautiful Day in the Neighborhood'?

2019 was a fantastic year for movies by women filmmakers, but you wouldn’t know it from the list of Golden Globe nominees. In all of the top film categories—best drama, best musical or comedy, best director, and best screenplay—the Globes announced an all-male shortlist. Two films from women directors were nominated in the foreign language category (The Farewell and Portrait of a Lady on Fire), but the other cinema categories were dominated by Parasite, Joker, The Two Popes, and Once Upon a Time in Hollywood.

The Globes are known for being a little chaotic, especially in the TV categories. For instance, this year’s drama shortlist included Apple TV’s critically-derided The Morning Show alongside acclaimed series like Succession and Killing Eve. So while the Golden Globes have excellent brand recognition, they’re not always a reliable judge of quality—partly thanks to their lack of respect for female screenwriters and directors.

Only five women directors have been nominated in the Globes’ 75-year history, and only one (Barbra Streisand for Yentl) actually won. The last woman to be nominated was Ava DuVernay for Selma in 2014, highlighted by Natalie Portman famously calling out “the all-male nominees” onstage during the 2018 ceremony. And let’s be clear here: Women were writing and directing brilliant, critically acclaimed movies during every one of those years. They just weren’t recognized by the Globes, whose nominees are chosen by the Hollywood Foreign Press Association, a small organization with amusingly byzantine entry requirements. I’ll allow the New York Times to explain:

“Members of the H.F.P.A. must live in the greater Southern California area. They must have received a paycheck for publishing something in a non-American publication four times. They must submit two letters of recommendation from current H.F.P.A. members “detailing how long you have been covering the entertainment industry while residing in the greater Southern California area,” which seems an overzealous application of the word “detailing.” They must pay a $500 initiation fee.”

Whoever the HFPA are, they’re inordinately fond of male filmmakers, to a degree that feels especially egregious in 2019. One of the other common criticisms is that some HFPA members are just excited to hang out with A-listers, which would perhaps explain The Morning Show being nominated. The same might be said of the actor/filmmaker imbalance for something like Hustlers or A Beautiful Day in the Neighborhood, where the A-list stars were nominated (Jennifer Lopez and Tom Hanks) while the less-famous directors (Lorene Scafaria and Marielle Heller) were not.

This year saw some stunning films from female writers and directors, and while we didn’t expect the Globes to recognize smaller releases like Mati Diop’s Atlantics, Joanna Hogg’s The Souvenir or Claire Denis’ High Life, what about the mainstream releases? Hustlers, directed by Lorene Scafaria. A Beautiful Day in the Neighborhood by Marielle Heller. Harriet by Kasi Lemmons. Little Women by Greta Gerwig, who was similarly shut out of the writing and directing categories for Lady Bird in 2018. Booksmart by Olivia Wilde, which should’ve been a shoo-in for the comedy/musical category alongside films like Knives Out and Rocketman.

All of these movies fulfill the criteria we expect for the Globes, but Little Women and A Beautiful Day in the Neighborhood feel like particularly blatant shut-outs. One is a crowd-pleasing and critically acclaimed novel adaptation with a star-studded cast, written and directed by a charismatic filmmaker with two Oscar nominations under her belt. The other is a quasi-biopic starring Tom Hanks, earning glowing reviews alongside mainstream audience buzz. Considering the fact that the Globes’ film categories are littered with middling choices like Bohemian Rhapsody, it’s almost farcical to see an artistic accomplishment like Little Women get overlooked. Hollywood Foreign Press Association, whoever you are—it’s time to do better.