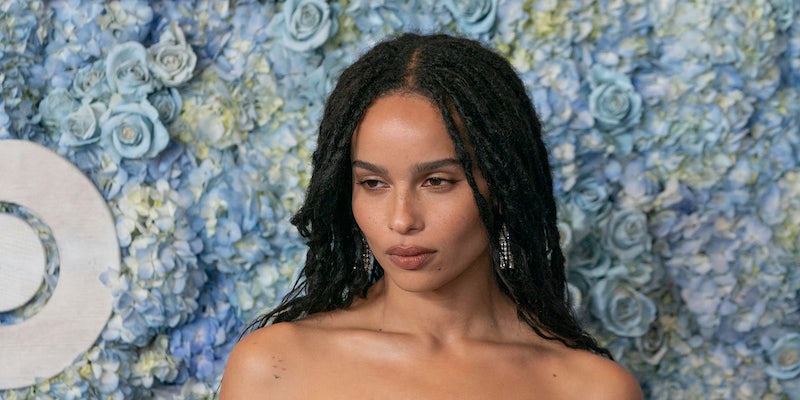 In the three days since Will Smith slapped Chris Rock at the Oscars after Rock made a joke about Jada Pinkett-Smith’s hair (she has alopecia), we’ve seen waves of misinformation, misdirected attacks, TikTok remixes go viral, and the event thinkpieces from just about every angle. Celebrities are still weighing in on the situation, leading to new waves of backlash—toward those celebrities. The most recent one involves actress Zoë Kravitz, whose comments about the slap caused her to trend on Twitter on Wednesday. But she was only one out of several celebrities dragged on social media for their comments surrounding the Oscars incident.

Zoë Kravitz, who was at the Oscars as a presenter, posted two photos of herself (one on the Red Carpet, the other at the Vanity Fair party), each of which called out the Oscars for being a show where people were allowed to assault others.

“Here’s a picture of my dress at the award show where we are apparently assaulting people on stage now,” she wrote in a caption paired with her Oscars ceremony dress.

Kravitz became part of the Twitter Oscars discourse as people brought up several avenues of hypocrisy including her association with the fashion designer Alexander Wang (who’s been accused of groping and harassing people at nightclubs), her previous relationship with Michael Fassbender (who was accused of domestic abuse by an ex), and even her father Lenny Kravitz’s previous relationship with Devon Aoki when he was 36 and she was 18. A snippet of a 2013 interview for V magazine also resurfaced and went viral because of her comments praising Jaden Smith, her After Earth co-star; Will Smith also starred in the film.

Jodie Turner-Smith, who tweeted that she had “second hand embarrassment for all involved,” has been criticized for her career choices and her relationship with her husband, actor Joshua Jackson; even the choice to propose to Jackson came under fire.

“It was so special and in hindsight the only thing i regret is letting him tell you guys anything about it, bc you bastardised it for your entertainment,” Turner-Smith said in response to people taking issue with a woman proposing to a man.

On Instagram, Alec Baldwin compared the Oscars to The Jerry Springer Show, but Twitter quickly brought up Baldwin’s altercations with the paparazzi as well as firing the prop gun that killed cinematographer Halyna Hutchins on the set of Rust, for which he is facing a wrongful death lawsuit from Hutchins’ family.

The backlash against Hailey Bieber, which included resurfaced instances where Bieber appeared to use the N-word on social media, arrived after she liked Kravitz’s Instagram post.

A Late Late Show segment in which James Corden made a joke at Smith’s expense didn’t go over well.

In response, Twitter brought up several of Corden’s past digressions including older claims that he once tried to advocate lower rates for late-night TV writers and a verbal altercation between Corden and Patrick Stewart at an awards ceremony in 2010 (they’ve since made up).

An older article about Bette Midler apologizing for calling someone “the N-word of the World” came up after Midler shared a Substack column by Kareem Abdul-Jabbar that criticized Smith and agreed with Abdul-Jabbar’s sentiment.

And they’re far from the only people who’ve gotten the treatment; Jim Carrey, Judd Apatow, Holly Marie Combs, Kathy Griffith, and O.J. Simpson are just some of the others who faced backlash for criticizing Smith.

Shortly after the slap occurred, Smith won an Oscar for portraying Richard Williams (Venus and Serena Williams’ father) in King Richard, an award he was expected to win, and in his polarizing acceptance speech, he apologized to his fellow nominees and the Academy. On Monday, Smith released a longer statement that included an explanation as to why Rock’s joke upset him as well as a direct apology to Rock, the Williams sisters, his King Richard cast and crew, and the audience who watched everything unfold. The Academy of Motion Picture Arts and Sciences, which condoned the incident, said that it was launching a formal investigation.

The Oscars slap is an incident that people are likely not going to stop analyzing or commenting about anytime soon, so it’s likely we haven’t seen the end of celebrities’ past comments or actions resurfacing in response.