Tangled Web: Don’t blame your divorce on my Facebook

All smoke, no fire—there's no affair here.

A girl I’m good friends with, mainly online (though we have met in person), just broke up with her long-term boyfriend. I know that a lot of our mutual friends think we’re having a secret affair and that I had something to do with the breakup, just because they see us talk a lot on social media. This couldn’t be further from the truth—for starters, part of the reason we talk a lot is that she was asking me for advice on how to fix her relationship! Also, if I were having a secret affair, wouldn’t I be LESS likely to talk to that person a lot in public? People aren’t coming to me directly with their suspicions but I know what they think. Is there any way for me to nip this in the bud? 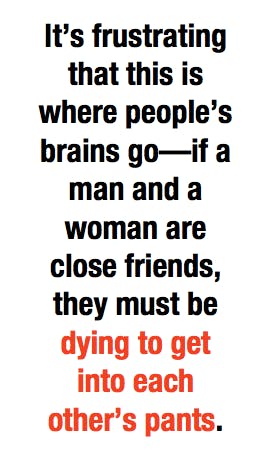 Yeah, if people are whispering behind your back but not saying anything to your face, there’s not a lot you can do besides privately disapprove of their gossiping ways. (I’m actually a fan of discussing social drama with people besides the ones involved—you know, get various perspectives. But if these are your friends, you eventually have to go to the principal actors and say, “Hey, so what’s going on here?”)

It’s frustrating that this is where people’s brains go—if a man and woman are close friends, they must also be dying to get into each other’s pants. (I’m assuming you’re a man because her last relationship was heterosexual and heterosexuals do this all the freaking time when they see cross-gender friendships. If you’re not, I apologize, and I’m still going to rant.) The fact that this is still happening even though most of your interaction happens online—i.e., a completely non-physical space—just shows how ingrained the idea is. That’s a bummer, for a lot of reasons; it means many people are misinterpreting your friendship, and it indicates that many of them don’t have close platonic cross-gender ties, which sucks for them.

But just because something is a bummer doesn’t mean it demands action. Most likely you just have to trust that eventually, the truth will become clear. She’ll end up with someone else, or you will. Her ex will decide to go embarrassingly public with details of the breakup, and you won’t be implicated. Someone will finally ask you privately, and you’ll clear things up, and they’ll go and transmit the information to the rest of the tittering crew. The current situation, e.g., “I’m pretty certain that someone has a sense of something that happened that isn’t correct,” doesn’t really demand or necessarily deserve a response.

Incidentally, yes: I will vindicate you by adding a +1 to your claim that if you were having a secret affair, you’d probably keep it secret. Consider this official Tangled Web doctrine: If you see two people talk to each other a lot on Twitter or Facebook, and one or both are not single, don’t jump to the conclusion that they’re banging or want to bang. The less discreet they are, the more likely it is that nothing is going on.