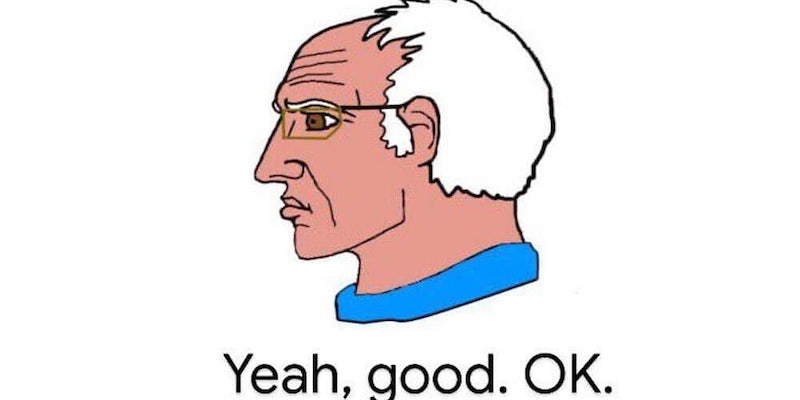 The rivalry between Sens. Bernie Sanders (I-Vt.) and Elizabeth Warren (D-Mass.) reached a boiling point last week amid reports that Sanders told Warren that “a woman couldn’t be elected president” in a December 2018 meeting.

This, in turn, spilled over into an especially contentious debate—in which both parties recalled a contrasting series of events—leading to a now-infamous post-debate exchange between Warren and Sanders. We now have the outcome of that terse conversation to thank for the “Yeah, good. OK” meme.

As all the candidates shook hands and exchanged pleasantries, Warren made a beeline for Sanders. Although viewers at home could not make out what was being said, CNN later obtained audio of the moment.

CNN revealed that Warren accused Sanders of calling her a liar on national TV. As Sanders huffily attempted to diffuse the situation, hedge fund manager Tom Steyer made the mistake of awkwardly inserting himself between the two.

“I don’t want to get in the middle of it—I just want to say hi to Bernie,” said Steyer, who should have honestly taken his own advice in the heat of the moment. “Yeah, good. OK,” Bernie deadpanned back to him.

It didn’t take long for the moment to go viral, as the dismissal was admittedly pretty funny at Steyer’s expense.

"yeah good ok" is the funniest goddamn thing ever

The moment soon became a meme.

According to Know Your Meme, the first instance of the phrase being used with a Chad-like illustration of Sanders was by an anonymous 4chan user. The following day, it appeared on the r/PresidentialRaceMemes subreddit in a post called “The Chad Bernie Sanders,” by user AvaTyler.

The Chad Bernie Sanders from PresidentialRaceMemes

The meme has since been adopted as an expression of dismissiveness on Reddit and Twitter—particularly among Sanders’ supporters shooting down criticism of their chosen candidate.

Here comes the unity… from PresidentialRaceMemes

Philadelphia artist Lauren Rinaldi mashed up “Yeah, good. OK” with a Baby Yoda Problems meme to joke about the seemingly unrequited bromance between Sanders and Steyer.

Bernie: I’m scared of getting this heart transplant.

Tom Steyer: It’s ok, I’ll be here after your surgery.

*Bernie wakes after surgery and sees a nurse*

Bernie: Where is Tom Steyer? He said he’d be here.

Nurse: Who do you think gave you the heart?

On Wednesday, the original poster, AvaTyler, added another post to the subreddit, comparing “Yeah, good. OK” to “OK boomer” with the caption, “Time to update your dismissive vernacular.”

time to update your dismissive vernacular from PresidentialRaceMemes

Unlike ardent supporters of Warren and Sanders, respectively—perhaps we can agree that both “Yeah, good. OK” and “OK boomer” are both great options?