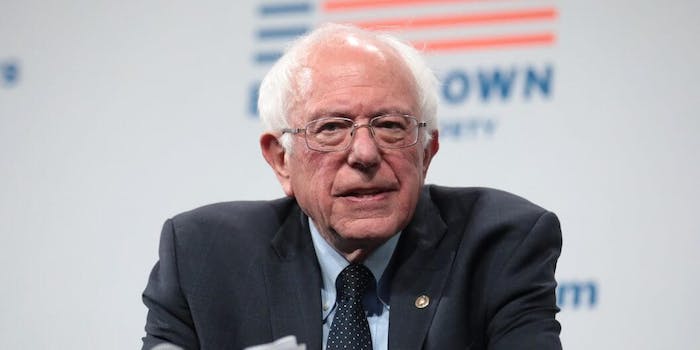 Over the weekend, Politico reported that Sen. Bernie Sanders’ (I-Vt.) presidential campaign was going negative on Sen. Elizabeth Warren (D-Mass.). The move marked an end to the quasi-truce between the two, who are longtime friends and colleagues.

According to a training script the outlet obtained, the Sanders campaign has begun telling potential voters inclined to vote for Warren that she appeals primarily to more “highly-educated, affluent people,” and doesn’t bring anyone new to the ballot box.

Asked about the story at a Sunday campaign stop in Iowa, where candidates are feverishly campaigning ahead of the primary, Warren urged unity, rather than the factionalism that characterized the 2016 Democratic presidential nomination process. Warren added that the party should nominate “someone that every Democratic can get behind.”

“He knows who I am, where I come from, what I have worked on and fought for,” she said.

“I hope Bernie reconsiders and turns his campaign in a different direction.”

Subsequently, a Twitter user claiming to be a Sanders campaign volunteer pushed back against Politico’s reporting.

“Here’s what actually happened,” @ericisaac’s thread began, “A random user who’s only ever posted once before posted that document in the Sanders volunteer Slack group. A moderator promptly removed it and stated that it was NOT a campaign source.”

The thread went on to accuse Politico of being “incredibly irresponsible,” and claim the Sanders’ volunteers signed an agreement prohibiting them from being negative about other candidates.

“This was not a campaign maneuver,” @ericisaac stated. “Period.”

Bernie is not sending his volunteers out to trash ANY candidate. We have a very strict code of conduct on how we MUST interact with voters if we want to be part of the campaign. @Politico and every other outlet reporting on this non-story are being used incredibly irresponsible.

As of Monday morning, the first tweet in the thread had 4,500 retweets. It generated so much chatter that Politico’s Alex Thompson, who broke the story alongside Holly Otterbein, felt obligated to deny it.

“Fwiw, this popular thread is not true. Attacking reporting and pushing misinformation is not just a right-wing phenomenon. I provided all the info to Bernie’s camp before publishing & they didn’t deny its authenticity,” Thompson wrote.

Also, no one on Bernie's team is refuting the story–either when we brought it to them beforehand or since we published it.

Thompson had previously tweeted that “Bernie trolls'” reaction to the story was divided between praising the tactic and demanding Politico “apologize and retract” because “the Bernie campaign would never do that.”

Accordingly, people’s willingness to believe either Politico or the self-described Sanders volunteer seemed to come to down to their predilections. Many Sanders’ fans believed the volunteer; most others believed Politico.

The presumed Republican nominee for president for once sided with the press.

On Monday morning, President Donald Trump tweeted that Sanders’ volunteers were “trashing” Warren. “Everybody knows her campaign is dead and want her potential voters,” he claimed, adding, “…Elizabeth is very angry at Bernie. Do I see a feud brewing?”

Trump also squeezed in an insult for Bloomberg, calling him “Mini Mike B.” and saying the former New York City mayor was getting “tiny crowds” who were “all leaving fast.”

Sanders has not officially commented on the story.