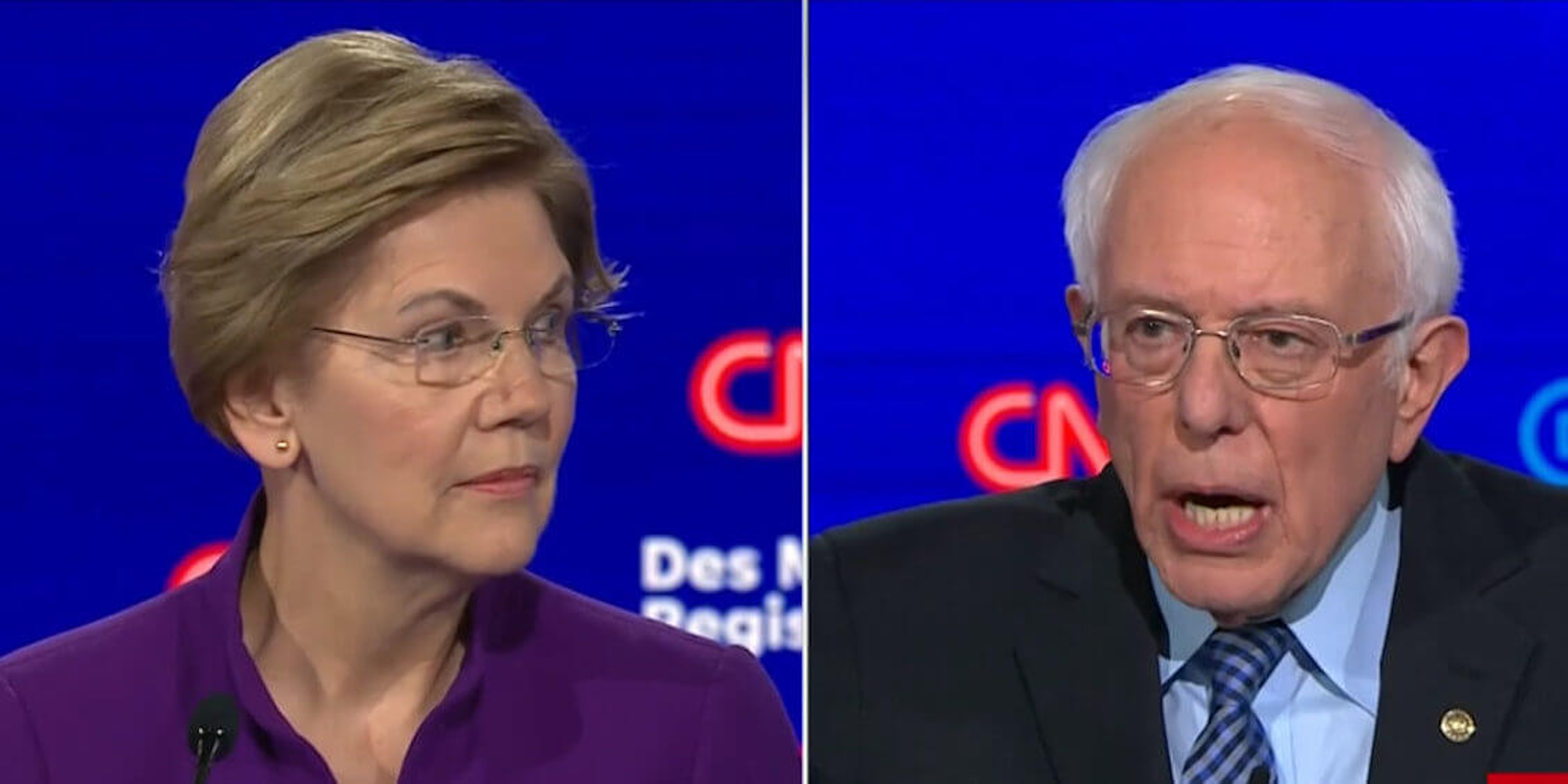 Warren ended the discussion with a solid quip.

Over the weekend, reports emerged that Sanders’ campaign was going negative on Warren. Then a story broke, seemingly leaked by the Warren campaign, that Sanders had told her in a private 2018 meeting that a woman couldn’t win the presidency, which he denied.

Some subsequently claimed they asked for their donations to be refunded from Warren’s campaign.

Nearly an hour into the debate, a moderator asked Sanders about the alleged statement.

Sanders again denied it, saying, “Well, as a matter of fact, I didn’t say it.” He also claimed that he told Warren to run in 2016.

The moderator then turned to Warren and asked how she felt when Sanders said that.

“I disagreed,” she began. “Bernie is my friend and I’m not here to try to fight with Bernie.”

Warren went on to deliver one of the takeaway moments of the debate.

“Look at the men on this stage,” she said. “Collectively, they’ve lost 10 elections. The only people that have won every election they’ve been in are the women. [Sen. Amy Klobuchar (D-Minn.)] and me.”

Can a woman beat Donald Trump? Look at the men on the #DemDebate stage tonight. Collectively, they have lost ten elections. The only people on this stage who have won every single election that they’ve been in are the women: @AmyKlobuchar and me. #DemDebate

Warming to her subject, she continued, “And the only person on this stage that has beat an incumbent Republican any time in the last 30 years is me.

“Here’s what I know: the real danger we face as Democrats is picking a candidate who can’t pull our party together or someone who takes for granted big parts of the Democratic constituency.

“We need a candidate who will excite all parts of our party and bring everyone in,” she concluded. “That’s my plan and that’s how I’m going to win.”

The short speech was well-received on Twitter, though some complained that the moderators had disregarded Sanders’ claim that he never made the statement in question.

“Let’s also appreciate the way Warren deftly pivoted that question to a larger point without further engaging in an argument that would have went nowhere,” tweeted Human Rights Campaign’s Charlotte Clymer. “That was truly masterful. She stuck the landing.”

.@ewarren’s response: “Look at the men on this stage, collectively they’ve lost 10 elections…We need a candidate who will excite all parts of the Democratic Party, bring everyone in and give everyone a Democrat to believe in. That’s my plan.” THE CROWD HERE GOES WILD

Elizabeth Warren just ended the electability question once and for all.

Yes, women can win. Yes, she can win. #DemDebate

Here it is, the Warren smear against Bernie Sanders that he said a woman can't win. The way it was asked was unprofessional and clearly biased. "Why did you say that?"

It's 2020 and we're still having the same identity fight as 2016. It's so pathetic and desperate. #DemDebate

This is insane. Moderator asks Bernie TWICE whether he told Warren a woman can't win the presidency. Immediately after he says no, she turns to Warren to ask what she thought when Bernie said that to her. #demdebate Doesn't seem like moderators care what he has to say.

"That's my plan and that's why I'm gonna win." @ewarren said what she said. Now what else is going on? #DemDebate

Moderator: "You're saying you never told Senator Warren that a woman could not win the election."

Bernie: "That is correct."

Moderator to Warren: "Senator Warren, what did you think when Senator Sanders told you a woman could not win the election."

elizabeth warren had a wide open window to end this diplomatically and she herself, not the media, not her staff, and certainly not bernie sanders, slammed that fucker shut in the clumsiest way possible

The contest between Sanders and Warren will undoubtedly be closely watched in coming weeks, with voting in Iowa just a few weeks away.