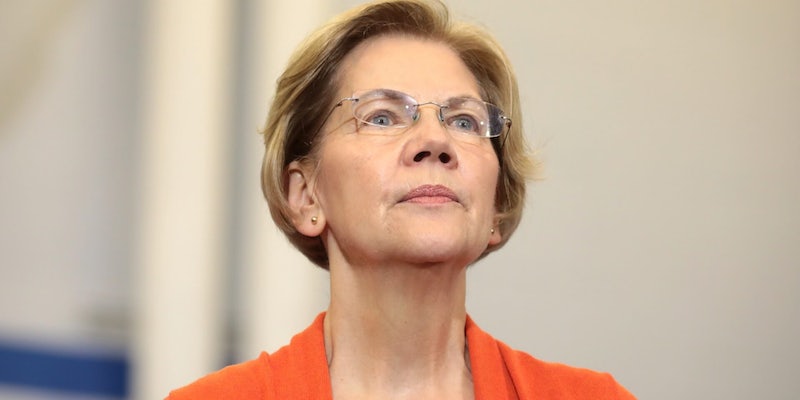 CNN on Monday published a report claiming Sen. Bernie Sanders (I-Vt.) told Elizabeth Warren (D-Mass.) at a meeting in December 2018 that a woman couldn’t be elected president. The report resulted in a major backlash online—for Warren.

According to the report, which quotes four sources who weren’t present during the conversation, the Democrats were discussing their political aspirations and supposedly entered a friendly agreement to “remain civil and avoid attacking one another” when Sanders made the offending remark.

“Warren laid out two main reasons she believed she would be a strong candidate: She could make a robust argument about the economy and earn broad support from female voters. Sanders responded that he did not believe a woman could win,” CNN reports.

After the explosive report, Sanders denied the claims and called them “ludicrous.”

“It’s sad that, three weeks before the Iowa caucus and a year after that private conversation, staff who weren’t in the room are lying about what happened,” he told CNN. “What I did say that night was that Donald Trump is a sexist, a racist and a liar who would weaponize whatever he could. Do I believe a woman can win in 2020? Of course! After all, Hillary Clinton beat Donald Trump by 3 million votes in 2016.”

Warren issued a statement on Monday evening confirming the 2018 meeting with Sanders.

“Among the topics that came up was what would happen if Democrats nominated a female candidate,” Warren’s statement said, according to BuzzFeed News reporter Molly Hensley-Clancy. “I thought a woman could win; he disagreed. I have no interest in discussing this private meeting any further because Bernie and I have far more in common than our differences on punditry.”

On social media, many saw the incident as an attack by Warren on Sanders to distract from her own campaign. Several people called it a “cheap” shot.

Warren's campaign is taking such low shots they're bordering on cheap.

This is why their campaign sunk

If Warren's campaign didn't directly leak the sexism story to CNN I'd like to see her clarify what she recalls Bernie saying. He very plainly didn't say he thinks a woman can't be president, and if Warren doesn't deny the rumors that means she's enjoying the optics

Many Sanders supporters seemed to be invigorated by the report, and #ITrustBernie was trending on Twitter by Monday afternoon.

This article actually refutes this with a very strong Sanders denial. All this stuff only motivates me to endorse & support Bernie more strongly. Already we are seeing tons of lies & desperation from the Warren camp. This tactic will backfirehttps://t.co/C70H8z3Ict

This is Bernie speaking against the First Gulf War to an empty House of Representatives. When it was hard to stand for peace, Bernie was willing to stand alone. It has never been easy for me to trust politicians, but #ITrustBernie to do everything he can to stop war. pic.twitter.com/ROAZKaZE6D

Something @AOC said really stuck with me (I paraphrase) about how after experiencing Congress in action, she was even more impressed that Bernie kept his integrity. #ITrustBernie because of how long, sincerely, compassionately he has resisted cynicism, despite powerful forces.

In 2016, I was a baby organizer tasked w/ turning out students for @IlhanMN.@BernieSanders turned out thousands of student who became delegates for Ilhan. They were a big reason we won.#ITrustBernie to be build our movement so we can elect more Rashidas, AOCs, & Ilhans. pic.twitter.com/xyOSdqa3hD

#ITrustBernie because he fight's for workers whether or not there's a campaign cycle.

"I've been on more picket lines, I expect, than all my opponents combined." – @BernieSanders #STOPBezosAct#FightFor15 https://t.co/2h2i3FU86p

I just donated to @BernieSanders campaign after that atrocious CNN article. Will my fellow Berners do the same? #ITrustBernie

Others said reports of the conversation caused them to lose their trust in Warren and definitively swayed their vote.

Some of you really want to divide & let Trump win again & the rest of us are just not going to have it anymore. Too much is on the line.

People also criticized CNN for reporting the claim based on sources who weren’t present and dropping the story one day before the Democratic debate.

Bernie said he believed a woman could be President while Warren was still a registered Republican.

News of the controversial dinner came on the heels of Politico’s report this weekend that Sanders’ campaign was turning on Warren.

It’s all leading some Democrats to remind everyone else what’s at stake if they lose this year.

Bernie and Warren are the two most progressive presidential candidates in a generation. Remind yourself of this before we decide to eat each other alive bc politico and buzzfeed wanted us to.

Hey, @ewarren & @BernieSanders; former Trump supporter here. I’ve campaigned for Trump, I know how MAGA works. Whatever is going on between you two & your staffers can we work this out in a civil manner. I promise you that Trump is watching & MAGA will use anything to divide us.