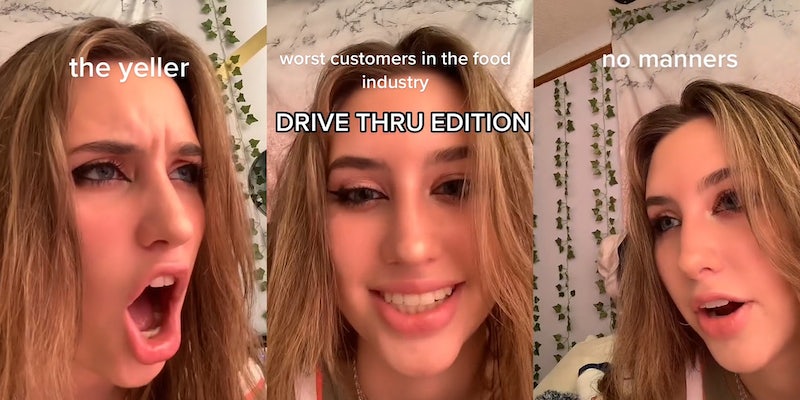 ‘If you do any of these, you suck’: TikToker shares the worst types of drive-thru customers

'When they're 15 feet away from the window so your whole body is out the window.'

In a viral video, TikToker Audrey Karn (@plz_stfu0) shared a drive-thru edition of the “worst” types of customers that food service workers have to deal with.

Karn categorizes the different types of bad customers as follows: “the yeller,” “no manners,” “orders from the passenger side,” “the gaslighter,” “cheapskate,” and “the phone caller.” Karn clarified in the caption that she did not want to name her place of employment, but that viewers “can assume where.”

@plz_stfu0 worst types of people in the drive thru; i also didnt want to put my place of employement but you can assume where #starbucks #serviceindustry #SplashSummerVibe #ShowUrGrillSkillz #drivethru ♬ original sound – much love

“The yeller” was characterized as someone who raises their voice to order, and the “no manners” customer is someone who orders without any small talk. Customers who order from the passenger seat are often difficult to hear.

“I’m sorry ma’am you’re going to have to speak up a little louder,” Karn says to the imaginary customer before eventually asking if the driver can order instead.

“The gaslighter” is a customer who claims they asked for a specific modification even though their order doesn’t reflect it. After asking for it to be fixed, the “cheapskate” characteristic comes through when they ask to keep the drinks that were not correct.

Karn would respond that giving them the drinks is against policy, even though they will be throwing them away. The last type of customer, “the phone caller,” prioritizes their phone call over ordering, and may sometimes claim that the “person at the drive thru is so irritating.”

Karn also shares a type of customer that they appreciate: the ones who ask what her favorite drink or recommendation is.

“We love this but if you’re gonna ask, trust,” she writes in the overlay text.

In the comments section, users in the food service industry share similar experiences.

“Or whenever they just pull up and your doing something and they just scream hello hello until you answer,” one user commented.

“Or when people literally ask ‘so what do you guys have here’ like there’s not a menu right in front of you,” wrote another.

“When they’re 15 feet away from the window so your whole body is out the window,” commented a third.

Karn responded saying, “Trauma dumping in the comment section. Girl I feel u.”