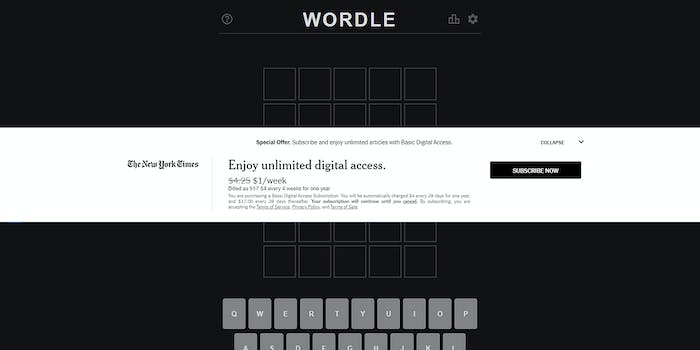 The free puzzle game Wordle was acquired by the Times this week.

The puzzle game Wordle was a runaway hit this January, combining the logic of Sudoku with the vocab skills of Scrabble. But after a month of unprecedented popularity, Wordle has been acquired by the New York Times, inspiring suspicion among its fanbase.

Along with being an innovative new challenge for puzzleheads, people were charmed by Wordle’s format and backstory. Created by software engineer Josh Wardle as a gift for his partner, Wordle’s viral success was a total accident. And crucially, Wordle is free.

There’s no app, which means no in-app purchases. No ads or data harvesting. No addictive gameplay, because Wordle is just a website offering one new puzzle every 24 hours. It felt like a breath of fresh air in the current internet landscape, which is why so many people were pissed when someone tried to sell a Wordle copycat on the App Store. So when the news broke on Monday that Wordle had been sold to the New York Times, fans were immediately concerned.

Reportedly sold for a price “in the low seven figures,” Wordle was acquired as part of the Times‘ push for more digital subscribers. Ominously, the Times stated that Wordle would remain “initially” free, suggesting that it would eventually be paywalled.

On Twitter, the home of Wordle fandom, the prevailing opinion is happiness for Josh Wardle, coupled with frustration at the circumstances of Wordle’s sale.

In the journalism and publishing communities (where Wordle is, unsurprisingly, very popular), some commenters also highlighted the contrast between Wordle’s payout and the Times‘ ongoing battle with unionized workers.

Last year the staff of Wirecutter (a product review site recently paywalled by the Times) had to go on strike to negotiate a 2% payrise; a $300,000 increase spread across 65 workers. That’s a fraction of what the Times paid for Wordle.

So while Wordle fans are supportive of Josh Wardle himself, there’s a sense of doom and gloom around the Times acquisition—both due to the likelihood of a paywall, and what the deal represents for internet culture. The era of small, independent websites is seemingly over. Most people’s online experience is now dominated by a handful of tech companies and media conglomerates, where all content is geared toward monetization. Even something as simple as a word puzzle can’t survive intact for long.

In a statement posted to Twitter, Josh Wardle expressed his gratitude toward Wordle’s fanbase, while adding that it’s been “a little overwhelming” to be at the center of such a phenomenon. “After all, I am just one person,” he wrote. Once Wordle moves to the NYT website (and undoubtedly finds a wider audience), the Times will take over the game’s operation, allowing Wardle to focus on other projects.