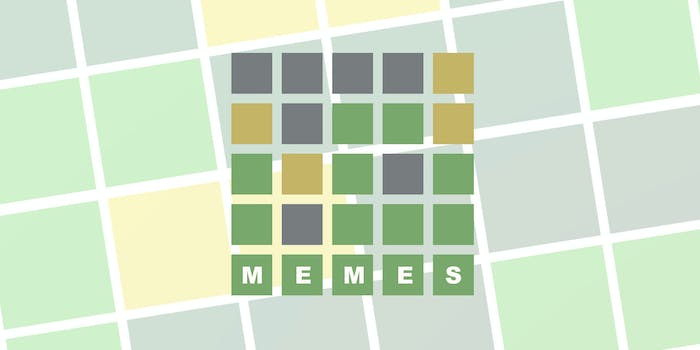 The game's been around for months, but it really kicked off last week.

Wordle, a daily word game that tasks players with guessing a five-letter word within six tries, has taken over Twitter in the wake of the new year. And sure enough, the memes are starting to take over as well.

Even if you’ve never played Wordle, you might recognize it from the emoji that have cropped up on Twitter lately.  The tweets usually include a string of green, yellow, and black or white squares. The final row usually includes five green squares, and a fraction indicates how many attempts (out of six) it took you to complete the game. Green squares indicate the letter is in the correct spot, yellow squares indicate the letter is in the word but in the incorrect spot, and black or white squares (depending on if the site is in light or dark mode) indicate the letter isn’t in the word at all. Plus, once you learn the backstory of how Josh Wardle originally created the game for his partner, the game even becomes a little romantic.

It’s a low-stakes game that costs nothing to play—you don’t even need an app for it, you just go to a website to play—but the emoji formatting lets you brag about solving the puzzle.

But it also opens itself up to plenty of different designs.

For some, Wordle, which offers a new word every day, became something to look forward to during the Omicron wave of the COVID-19 pandemic. But solving it early also meant waiting hours for the next puzzle to appear. (Some people have already navigated around that snag by coding versions of the game that allow you to play more than once a day.)

It’s a simple game, one that can make the people who sign on feel like they’re part of some secret club even though its popularity exploded on Twitter over the past week.

So far, Wordle is still catching steam as more people discover the game. And while we might lose interest in Wordle by next week, it’s a great encapsulation of an internet era long gone. It doesn’t cost anything to play, it doesn’t require us to agree to draconian terms and conditions to access it, we don’t need a smartphone. It’s just a game.