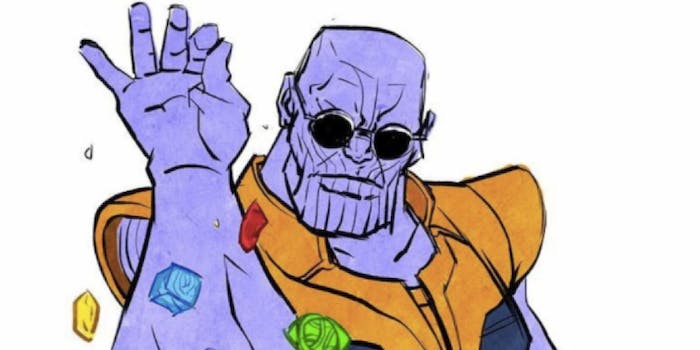 He made the Big Bad into a bae.

Marvel’s immense superhero crossover, Avengers: Infinity War, juggles more than 30 different characters, but the story ultimately belongs to one guy: the villain, Thanos. As he strives to collect a gloveful of Infinity Stones and wreak havoc on the entire universe, Josh Brolin’s character gets more screen time and more personal development than anyone else in the movie. No surprise, then, that this drawing has been especially popular this week:

Ok since this #thanos artwork gone viral again due to #InfinityWar trailer, and mostly not directly from my acc, i post it here again. #Marvel #AvengersInfinityWar #Avengers pic.twitter.com/b7QHQ0jEi6

Illustrator Roshfaizal Ariffin told the Daily Dot he likes to draw mashups of things that are trending. In September 2017, after the first trailers for Infinity War came out, this combination of Thanos and the chef-turned-meme “Salt Bae” was a natural fit.

“For me, it was like a normal parody art that I used to draw and post before with zero expectation,” the 36-year-old comic artist from Malaysia told the Daily Dot.

But the reaction was far from zero. Other accounts stole his post, and it went unexpectedly viral. People didn’t just share it online—they absorbed it and made it part of their real lives.

“Someone from Korea turned it into a permanent tattoo, a pizza restaurant in Italy and a coffee shop in Nebraska using the art for their special menus, shared by many including comic news portals and even by Thanos himself, Mr. Josh Brolin on his IG,” Ariffin said.

Cut it, slap it, then sprinkle it with a bit a… —� @marvelstudios #chefthanos #thanos #infinitywar

The only problem is that, once his creation was out in the world, the artist kind of lost control of it. His original posts didn’t gain nearly as many likes and shares as the copies. “Hundreds of people” tried to sell merchandise based on the drawing, he said.

“Thanos Bae” made the rounds again once Infinity War finally came out. And, of course, Ariffin went to see the movie. He’s certainly not in the majority on this, but Thanos was his favorite character.

“I went to watch it again last night for the third time,” he told the Daily Dot. “I love the way they portray Thanos as a character with so much depth (compared to comics). His motivation is not just so clear but somehow, I can say it’s selfless & noble. For me, he’s the protagonist for the movie.”

He’ll have to wait a year to see what happens to his big bad Marvel bae, but he’s already looking forward to it. And, after the brutal cliffhanger at the end of Infinity War, so is everyone else.