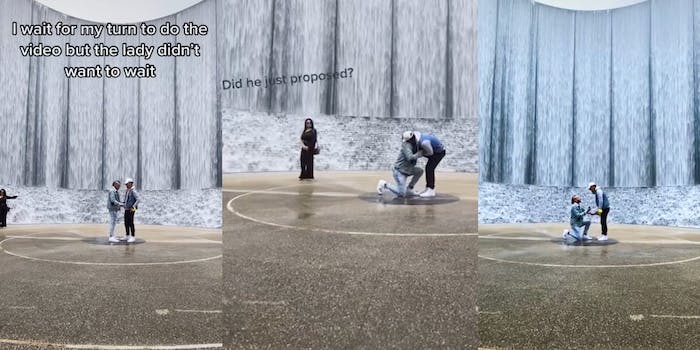 ‘This made me so mad’: Viewers are divided after woman crashes TikToker’s proposal to take photos

'She has to pay for your wedding now. She wanted to be part of the engagement.'

A Houston couple’s heartfelt proposal video captured more than just the happy occasion after an oblivious woman videobombed the moment.

Javier Maldonado posted a TikTok of himself proposing to his now-fiancé at the Gerald D. Hines Waterwall Park in Houston. In the background of the video, a woman can be seen taking photos in front of the park’s signature waterfall, seemingly unaware that an engagement was occurring right next to her. Maldonado used the app’s text-to-speech feature to comment on the lady in his video, claiming she didn’t want to wait to snap pictures with the monument.

“I wait for my turn to do the video but the lady didn’t want to wait,” Maldonado wrote in his video.

The lady can be seen awkwardly walking out of frame as she realizes what she stumbled into.

The TikTok sparked a debate in the comments. Some users defended the lady by pointing out that the park is open to the public.

“It’s a public space, and how was she suppose to know she was in frame,” one user remarked.

“It was really no big deal it was obviously a public place if you want privacy go somewhere private she wanted to take a pic too not a big deal,” another said.

Others argued that she should have waited her turn like the couple did.

“This made me so mad omg,” one user typed.

“Hope the same people who are defending her have that same energy when it happens to them,” a commenter wrote.

“Y’all, if I see people doing something I’m gonna wait,” a third said. “My mom taught me this all the time. It’s just basic decency. If it was an accident, it’s fine but then she seen and moved closer.”

“She has to pay for your wedding now,” another TikToker joked. “She wanted to be apart of the engagement.”

A handful of commenters offered to digitally remove the woman from the couple’s video, and Maldonado was apparently put in contact with one of them. It seems like the big moment was saved after all, with Maldonado posting an edited version of the proposal—sans random lady—to his TikTok.