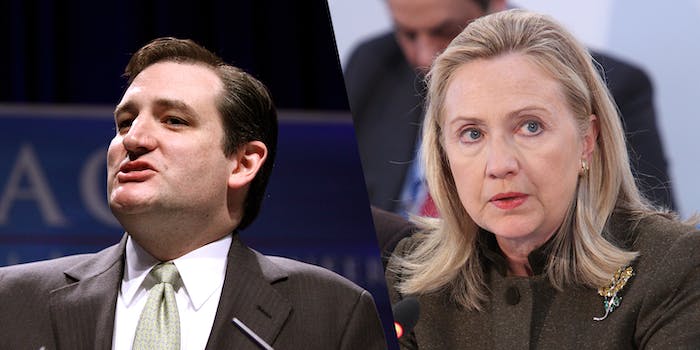 Which presidential candidate has the most annoying Twitter supporters?

There can be no dispute.

We are still so far from the end of this election year.

And yeah, November is still seven months away.

However, we are entering the home stretch of the nomination process, which means things are about to get a lot less dramatic in what will probably be the most lopsided general election… ever. But before we say goodbye to some candidates, let’s rank them in terms of just how annoying their supporters have been on Twitter this year.

I'm ready to get on with the general election. Let's do this @HillaryClinton! #ImWithHer pic.twitter.com/h3I97urhdn

You can’t really tear someone down for being well-adjusted. Usually, in an election year, there’s plenty of cheap shots to be made about supporting the whinging, blue-blood, middle-of-the-road democrat (and Hillary Clinton most certainly is that), but luckily she’s stacked up against a screaming old Vermonter promising free money and weed and two of the worst people in the world. Like, sure, I can still try to tear her down—A VOTE HILLARY IS A VOTE FOR THE FALSE, ENDURING BELIEF THAT THE SYSTEMATIC, COMPREHENSIVE ISSUES IN OUR WORLD CAN BE FIXED WITH THE MACHINE THAT GOT US HERE—but it doesn’t work too well. Supporting Hillary is like buying groceries: You’re off the hook.

The John Kasich constituency is basically made up of moderate Republicans who are too proud to sell their soul to the Ted Cruz fasco-theocratic crusade but not quite cynical enough to permanently abandon their party and head for higher, bluer ground. They’re a pretty sympathetic group, but also mildly unbearable. Listen, I get that it’s pretty upsetting that the American conservative base has transitioned from John McCain and Mitt Romney to a genocidal maniac and the Zodiac Killer, but it’s also not surprising. Sarah Palin was a thing in 2008. David Duke was a congressman. This has been happening for a while. Moderate Republicans didn’t do shit, and now they’re fucked. Good! Supporting John Kasich is like voting for the faint twinkle in your dad’s eye when he thinks about Ronald Reagan. It’s over. Find a new god.

I’m not confident that anyone voting for Ted Cruz knows how to use the Internet, so this one is pretty hard to rank. In some ways, the idea of someone seriously invested in the Cruz campaign is more terrifying than any anarchist, nihilist (and vaguely facetious) advocacy coming from the Trump camp, but people can’t tweet from rotary phones, which means Cruz supporters are a lot quieter. So yeah, number three.

Cruz bots enjoy your last evening as an electable candidate by votes, because after tonight you can only win by stealing & dirty tricks

Donald Trump has such a comprehensive foothold in Twitter bullshit that it’s actually sort of impressive. I don’t think anyone has ever had this many terrible demographics on lock. Let’s review.

It’s a jungle out there. And while it’s apocalyptically hilarious, there’s no question Donald Trump’s Twitter headquarters is top-tier. The only thing holding them back is a slight dose of condescending tunnel vision…

Sorry, there’s no chance this was going to be anything else.

I like Bernie! I’d vote for him. He’s a real lifer in a broken, horrifically depressing political landscape that seems to spit out net-zero nobodies at a constant rate. The fact that I can find a video of Sanders trashing “Don’t Ask, Don’t Tell” back in the ’90s is awesome.

But man, I really hate what the Internet has done to Bernie Sanders. A groundswell of uplifting, organic support quickly turned into this awful, exhaustingly hip, flashpoint mantra where anyone not down with Sanders’ very optimistic, and distressingly simplified rhetoric is painted as a non-woke, Nickelback-loving suppressive. Bernie Sanders is appealing to the worst kind of vapid, smug, unrefined Twitter crew, who seem to believe any statement is valid and true as long as it’s pointed in the right direction. Recently he said that “when you’re white, you don’t know what it’s like to be living in a ghetto, you don’t know what it’s like to be poor,” which is a statement that doesn’t hold up to any critical thinking, which is maybe the biggest problem with the 21st century as a whole.

At the end of that same statement, Bernie Sanders talked about how if elected, we need to “end institutional racism.” Sanders can’t do anything to end institutional racism. He’s saying that specifically to charge up his Twitter electorate so they can posture on the right side of history. No consideration given to the sheer extent of systematic injustice. If you’re a white man talking about institutional racism, you need to approach it with the sorrow, and respect it deserves. You can’t promise anything. You shouldn’t promise anything. Bernie knows this, he knows there’s no way he’s ending institutional racism in eight years, and he knows what a ridiculous thing that is to even introduce, but he’s also cornered by the uncritical fake-teenagers who eat laudatory nothings for lunch. It sucks. His heart is in the right place, and I know why he’s saying what he’s saying, but it sucks—all thanks to his Twitter base.

At least their fan art is on point.