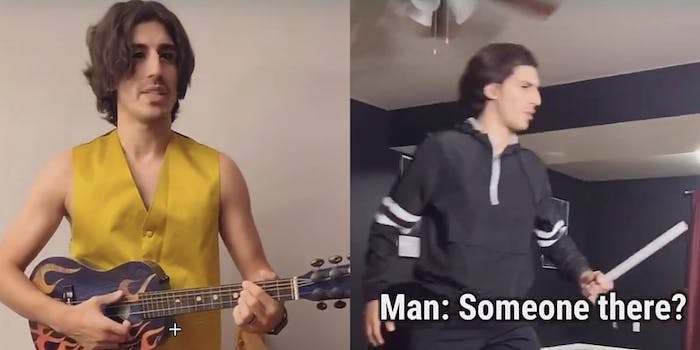 Hey, you. You’re finally awake. You were trying to find a new Skyrim meme, right? You’ve come to the right place.

The Elder Scrolls V: Skyrim is arguably one of the most iconic RPGs in video game history. Even more fantastical in scale than any of its predecessors in the franchise, Skyrim is known for its glorious landscapes, endless character advancement options, and rich diversity. Recently adapted for the Nintendo Switch, it remains extremely popular despite the release of several new Elder Scrolls titles.

It’s also wonderfully easy to meme. From epic Skyrim-themed raps to skill tree spoofs to the endless array of mods that are memes in and of themselves, there really is no limit to this game’s meme potential. Now, its NPCs are under fire.

Goofy NPCs are not unique to the Elder Scrolls series. By their very nature, non-playable characters always end up a little robotic and off-beat. However, there is something particularly hilarious about the peculiar brand of kookiness Skyrim NPCs possess that really stands out in the game’s otherwise hyper-realistic world.

Here, in part one of the series, JinnKid introduces us to the first of several well-known NPC archetypes. In this TikTok, he acts like a Courier delivering a letter from Jarl Ulfric, a rebel leader. He captures the character’s odd, run-on dialogue, strange responsiveness, and absurd gait perfectly. Having the NPC moonwalk backward and walk-slide awkwardly against the wall? It’s almost too accurate.

Part two focuses more on the weird, glitchy movement of NPCs and their hilarious responses to playable character stimuli. (Truly, is there anything more realistic than us players hitting NPCs for no reason? They’re so fun to mess with.) JinnKid even walks directly into a chair and “glitched” on top of it. Also, “You try mercenary work?” is undoubtedly one of the most memed phrases of the game. A+ execution, JinnKid.

Like the previous TikToks in this series, part three incorporates perfectly accurate music, sound effects, and the distinctive floating hand of first-person gameplay. In this video, JinnKid pokes fun at Skyrim‘s semi-broken stealth mechanic. Few things are more amusing than stealing something right from under an NPC’s nose and then watching them frantically look around for the thief—even though you’re literally hiding in plain sight right in front of them.

JinnKid’s next TikTok in the ‘Skyrim in real life’ series, part four, focuses on a very specific category of NPC: Bards. Between his flamboyant vest, ludicrous stance, and—of course—acoustic guitar, JinnKid has this fan-favorite down to a tee. Enjoy this TikTok user’s inspired parody of in-game song “Ragnar the Red” as he commits almost too much to this excellent bit. (RIP to the unsuspecting Bard and his perfectly functional guitar.)

Ah, picking locks: a staple of any Elder Scrolls experience. In arguably his best video yet, JinnKid combines lock-picking with the best facets of his previous Skyrim TikToks into one hilarious tribute to NPC nonsense. Snatching up gold? Check. Oblivious NPC you just stole from? Check. Comically broken NPC movement? Check. And, of course, JinnKid hits the nail on the head with the ending—as long as an NPC falls asleep, you can truly get away with anything.

Damn you, Stormcloaks. Looks like we’ve got to start playing Skyrim again.