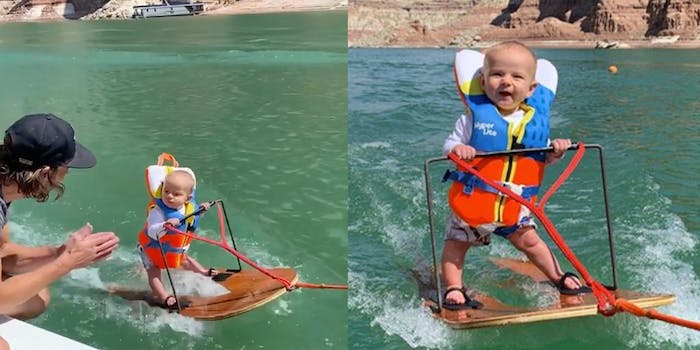 Despised viral video showed a 6-month-old waterskiing. Now, his parents are speaking out

Their pediatrician signed off on the stunt, they say.

A Utah couple is defending their decision to take their son, 6-month-old Rich, waterskiing for his 6-month birthday.

Casey and Mindi Humpherys took Rich out to Lake Powell in Utah this month where they filmed his first official foray into waterskiing. The resulting clip, which they uploaded to social media, quickly went viral and split the internet. Some people accused the new parents of endangering their child, while others congratulated the bold and adventurous act.

In response to their critics, the Humpherys’ are speaking out. In an interview with Good Morning America aired Wednesday, the Humpherys clarified that doctors were on hand the entire time, and their pediatrician signed off on the stunt.

According to the Humphreys, the boat that was toting Rich never exceeded 5 miles an hour. Casey, Rich’s father, rode alongside in a separate boat, in case his waterskiing son wavered or needed a hand. The clip shows Rich, tiny feet loosely strapped onto a special ski, gripping an attached safety rail. Rich transitions between concentration and delight as his pint-sized ski cuts through the water.

In total, Casey said there were between 10 and 12 people involved. “A couple of doctors, a nurse on the boat,” he explained to GMA.

Commenters tore into the initial clip following its posting on Sept. 12. Critics called the Humphreys’ “extremely irresponsible” and “reckless.” Others accused the parents of “child abuse” and “endangerment.”

“No hat for the baby on a hot day. Legs look like they are going to break. I hope CPS takes the child away,” one commenter said. Many commenters expressed concern over Rich’s standing position, noting that 6-month-olds are not capable of standing without damaging their spines and legs.

According to several sources, including BabyCenter and Quest For Health KC, there is no such thing as “too early” for a baby to stand. The idea that allowing a child to support their weight too early will cause bowed legs is an old wives’ tale with no truth to it. Quest For Health notes that “standing with proper support is not only safe, but also beneficial,” to infants and toddlers.

Other people noted their fear that Rich could have toppled backward, either hitting his head on the ski or falling into the water. The video shows his father carefully waiting in the wings, however. He even reaches his hand out on occasion to ensure that his child is still firm. This helped to alleviate concerns over drowning, as well, since the American Academy of Pediatrics recommends that infants should be “within arms reach” whenever they are near water.

The GMA interview has cleared things up for many commenters. While the occasional criticism still finds its way onto the family’s Instagram posts, the comment section is now overflowing with well wishes and encouragement. “That is awesome,” one commenter wrote. “Ignore the negative ones out there. They are just jealous of all the fun he is having!”

Similar sentiments are plastered throughout the comment sections for the waterskiing video on Rich’s personal Instagram—run by his parents of course—as well as both parents’ Instagrams. On Casey’s page, he shared photos and videos of the process behind teaching Rich to waterski. Upon seeing the careful steps taken, many commenters’ fears were eased.

Casey noted that he and his wife are unbothered by the negative feedback their video received. “I really feel like the majority of criticism comes from people caring, and people just being concerned and wanting the best for our child,” he said. “Honestly, we appreciate that.”

Rich’s ride elevates him to a world record holder, according to the Daily Mail and the Humphreys. The previous world record was held by Florida native Zyla St Onge, who was 23 days older than Rich when she accomplished the task.

“Whether you agree with what we’ve done for Rich, and what he’s accomplished, or not, you can understand how exciting it is to see your child accomplish something,” Casey said.