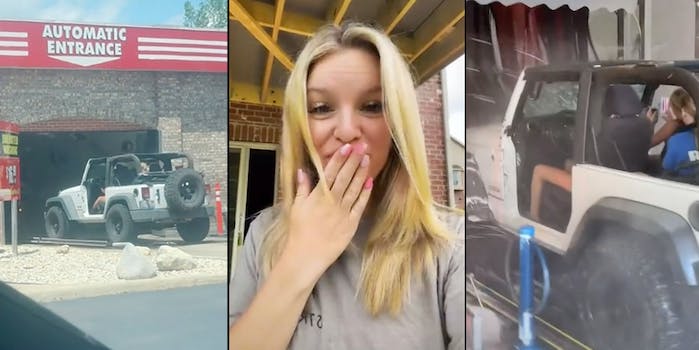 'Are they for real?'

A viral TikTok with a definite summer-gone-wrong vibe is making the rounds, featuring a group of women who are driving an open-top Jeep through a car wash.

The video comes courtesy of TikToker @samijo_xoxo, who has attracted more than 1.8 million views in a single day for capturing the group of women being allowed into the car wash with an open-top vehicle.

The TikToker, who captioned the video with a “car wash or water park” comment and a laughing emoji, narrates her disbelief about their mission as well as the willingness of the car wash employees to let them go through with it.

“These girls are trying to go through the car wash,” she comments as the Jeep approaches the car wash entrance.

As they’re allowed in, she marvels, “Oh my God. They’re letting them go.”

She then remarks, “Are they for real? They’re gonna get soaked!”

She concluded by saying, “I wish I was on the other side to see this.”

That led one respondent to remark, “Pretty sure you had a civic duty to leave [the] line and go wait on the other side to show us the video … so disappointed.”

The TikToker remarked that she was disappointed, but revealed that it appeared to be a planned stunt. “I saw the guys inside filming so I knew they’d post it eventually.”

That video went up on TikTok via @nickmendola, garnering a more modest 43,000-plus views since his video of the women in the car wash went up Sunday evening.

She shared her reaction to the video on Monday morning, gathering nearly 180,000 views in the process.

“Obviously, it was planned to get views,” said one person cynically, adding “A camera in a car wash” with an eyeroll emoji.

Another made a judgment about the women—who have not yet been identified—in the video, commenting, “Tell me you have rich parents without telling me.”

Another simply assessed, “It’s a Jeep; it will be fine.”