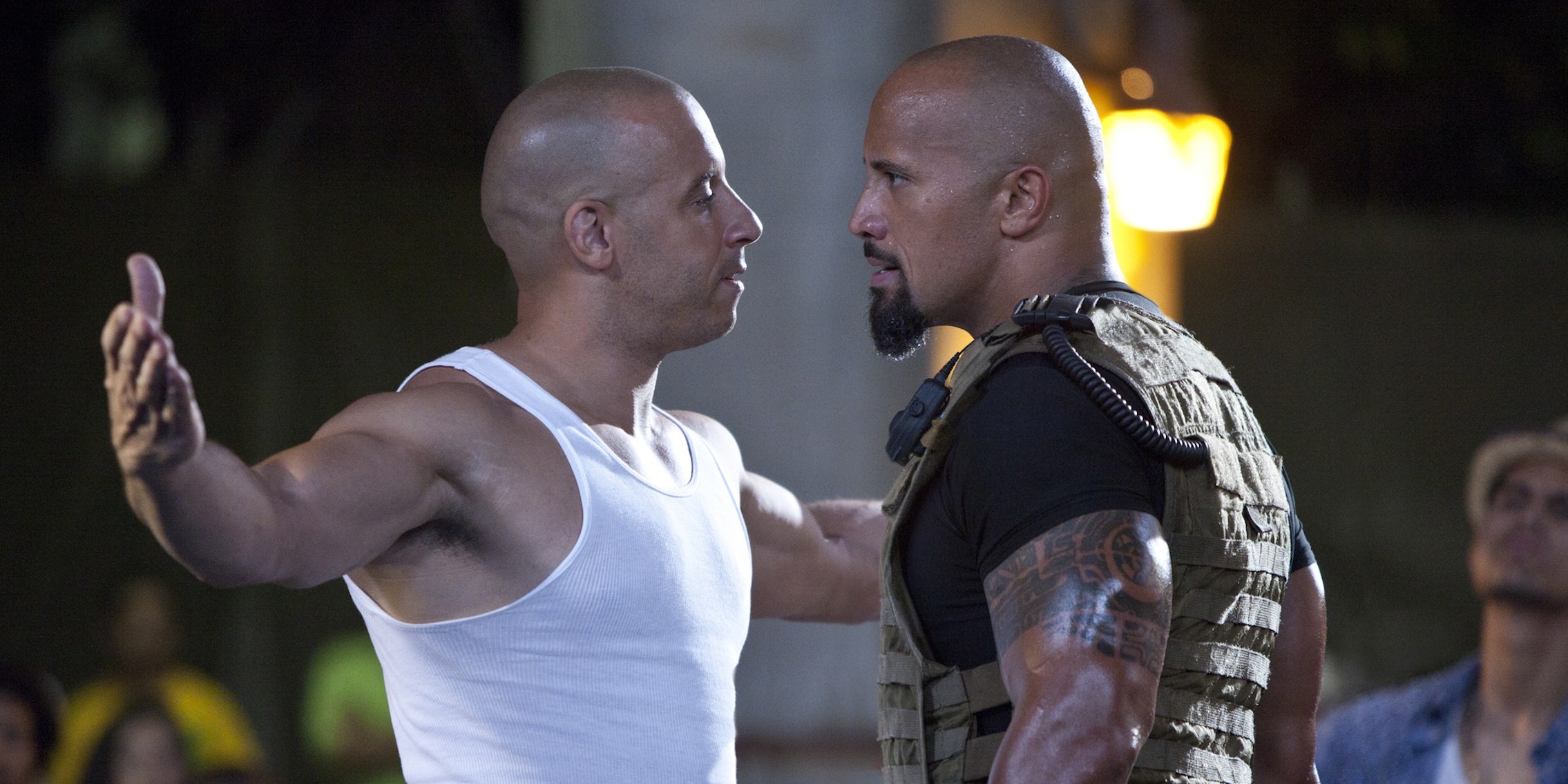 Diesel just published a plea for the Rock to return to 'Fast and Furious'... but the post is full of passive-aggressive details.

Vin Diesel and Dwayne Johnson have the best kind of Hollywood feud. It’s petty. It’s ego-driven. And since neither of them are necessarily in the wrong, you’re free to take sides with impunity. Almost as if this whole thing was partially orchestrated by a former professional wrestler!

The feud may stem from both actors wanting to be the top dog of the Fast and Furious franchise. An unsolvable conundrum, because while Vin Diesel is the producer and first-billed star, Dwayne Johnson is probably more famous outright.

Johnson joined the franchise in Fast Five (2011), but by Fate of the Furious (2017) the two actors were openly feuding, with Johnson calling out unnamed “candy asses” and “chicken shits” among his male co-stars. Johnson’s character Hobbs then moved over to his own spinoff, leaving the main Furious crew behind. But according to Diesel’s latest Instagram post, Diesel wants to build bridges and invite Johnson back for the tenth movie.

While allegedly an attempt to make peace, this post carries some obvious callbacks to the ongoing feud. Let us first take a look at the photo. It’s a shot from Fast Five, but it’s not a high-quality screencap. It looks kind of warped, making Vin Diesel appear larger than the Rock. This seems to be a recurring insecurity for Diesel, as proven by this infamous scene that was filmed to make Diesel look bigger when the two are standing face to face:

In reality, Diesel is about 5’11” while Johnson is about 6’2″ or 6’3″. Johnson, a famously enormous man, is also just bigger overall. At the same time, both actors (alongside their co-star Jason Statham) reportedly have contracts stipulating how many fights they’re allowed to lose on-screen, making sure that neither man appears more powerful than the other. This brings us to the actual text of Diesel’s Instagram post, which begins: “My little brother Dwayne…”

Little brother! What an exquisite note of passive-aggression. Johnson (49) is younger than Diesel (54), and the Fast and Furious cast love to refer to each other as family. However this “little brother” thing has a blatantly catty subtext. In 2017, Diesel said, “I protected Dwayne more than he’ll ever know. […] Dwayne Johnson only has one big brother in this film world and that’s me.” This was in response to Johnson’s “candy ass” comments, with Diesel simultaneously trying to look mature and undercut Johnson’s image as an alpha male star. Positioning himself as a powerful mentor figure, Diesel frames Johnson as a kind of helpless newcomer who Diesel took under his wing.

In a recent Vanity Fair interview, Johnson struck back, saying, “I have one big brother and it’s my half brother. And that’s it.” So when Diesel opens this new Instagram post with “little brother,” he’s not being 100% sincere.

The post continues with a request for Johnson to return for Fast 10, with Diesel invoking his own children (“As you know, my children refer to you as Uncle Dwayne in my house.”) and the legacy of his close friend and Fast and Furious co-star Paul Walker, who died in 2013. (“I told you years ago that I was going to fulfill my promise to Pablo.”) “I swore that we would reach and manifest the best Fast in the finale and that is 10!” writes Diesel, working himself up into an almost religious fervor as he describes Fast 10 as Johnson’s “destiny.”

Diesel’s plea is typical both for his slightly chaotic Instagram presence (he doesn’t even tag @therock!), and for the feud as a whole. It’s messy and public, and the outcome ultimately doesn’t matter. Fast 10 will probably be just as good without Dwayne Johnson, and Dwayne Johnson’s career will continue just fine without Fast 10.