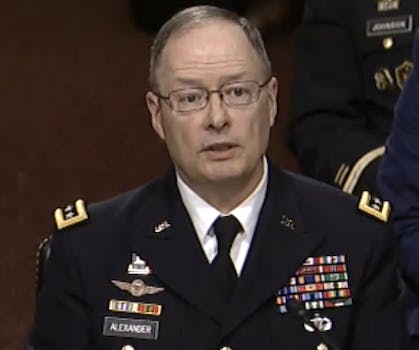 Though there’s serious disagreement in Washington, D.C. over whether escalating hacks on U.S. networks count as war, here’s one indicator: The U.S. military is creating 13 dedicated “cyber attack” squads to defend national security.

According to General Keith Alexander, who heads the U.S. Cyber Command Center—a joint effort between Army, Navy, Air Force, and Marine forces—that operation is about to go on the offensive.

“This is an offensive team that the Defense Department would use to defend the nation if it were attacked in cyberspace. 13 of the teams that we’re creating are for that mission alone,” Alexander said. “This defend-the-nation team is not a defensive team.”

He clarified that those 13 squads would be treated like military units.

“The teams are analogous to battalions in the Army and Marine Corps—or squadrons in the Navy and Air Force,” Alexander, who also heads the NSA, said before the Senate Armed Services Committee on Tuesday. “In short, they will soon be capable of operating on their own, with a range of operational and intelligence skill sets.”

In addition, Alexander said, Cyber Command will create 27 other groups dedicated to surveillance and training.

Alexander has warned of growing “cyber attacks” and threats on U.S. networks for years. His case seems to have been bolstered by a recent report that concluded most cyber attacks come from a single Chinese military building. Some Congress have used this to push new cybersecurity legislation, like representative Mike Rogers (R-Mich), who authored the controversial Cyber Intelligence Security Protection Act (CISPA).

Others, however, aren’t as clear. China, unsurprisingly, has vehemently denied claims that it sponsors hacking, and in turn says that it’s frequently attacked by U.S.-based hackers. And not all cybersecurity firms agree that China is the clear instigator, or consider it fair to consider such hacks acts of war. President Obama, for instance, deliberately avoided using military language to describe Chinese cyber attacks in a Wednesday interview.

Alexander preemptively stated that increased intelligence gathering this wouldn’t infringe on Americans’ civil liberties—”We do not see a tradeoff between security and liberty,” he said—but he didn’t clarify how he’d accomplish that. He did, however, stress the necessity of the military increasing its online presence.

“We have no alternative but to do so because every world event, crisis, and trend now has a cyber-aspect to it, and decisions we make in cyberspace will routinely affect our physical or conventional activities and capabilities as well,” he said.