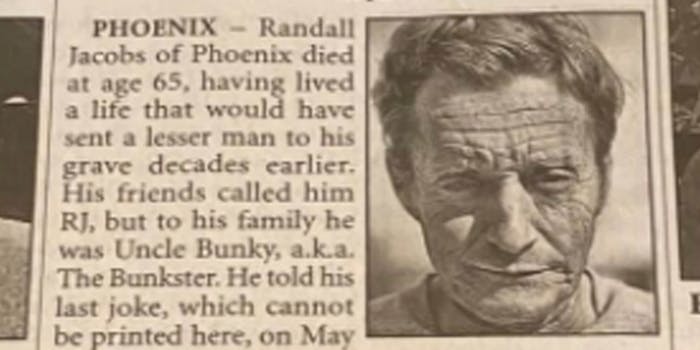 The death of a loved one is always a tragic occurrence, but sometimes, the best thing you can do to work your way through grief is to turn it into a celebration of a person’s life, reminiscing on the good times you had instead of the things you’ve now lost.

A recent obituary printed for a man lovingly known as “Uncle Bunky” is the perfect example of finding the humor and heart in the life of someone who has passed—so much so that now even a bunch of strangers on the internet are pouring one out for him.

Randall Jacobs died at the age of 65 in Phoenix, Arizona, “having lived a life that would have sent a lesser man to his grave decades earlier,” reads his obit. “He told his last joke, which cannot be printed here, on May 4th, 2020.”

The obituary goes on to weave the tale of a man who knew how to party hard and was deeply loved by everyone who knew him.

“Uncle Bunky burned the candle, and whatever else was handy, at both ends. He spoke in a gravelly patois of wisecracks, mangled metaphors, and inspired profanity that reflected the Arizona dive bars, Colorado ski slopes, and various dodgy establishments where he spent his days and nights,” it continues. “He was a living, breathing ‘hang loose’ sign, a swaggering hybrid of Zoni desert rat, Socal hobo, and Telluride ski bum.”

The writer also notes that “a night out with Bunky could result in a court summons or a world-class hangover, but his friends and family would drop whatever they were doing to make a trip out to see him.”

The tribute was shared to Twitter earlier this week and soon went viral, with every stranger suddenly so bummed out that they had never gotten to spend time with this super chill sounding guy.

“I already miss him, and I didn’t know about him until 5 minutes ago,” Twitter user @Jbird457 wrote.

And some of his sayings mentioned in the obit seem to have made an impact on people.

The writer of the fawning obituary was reportedly one of Bunky’s nephews, Chris Santa Maria. After the piece went viral, folks dug up a tweet from him, mourning his passing and showing that the man really was as well-loved as it sounded.

“My uncle passed away 10 days ago and I’ve been an inconsolable mess ever since,” he wrote. “He was 65 and somehow managed to wring out 9 lives while burning the candle, and whatever else was handy, from every angle.”

He also shared a few additional anecdotes about his Uncle Bunky upon request.

“He took me to my first NASCAR race where we snuck into the Dewalt promo tent and got kicked out because we started shotgunning Busch beers and snagging all the schwag,” Santa Maria recalled. “He screamed ‘I’M SORRY I THOUGHT THIS WAS AMERICA!’ as we bailed out lol.”

Santa Maria’s phenomenal tribute to his uncle includes some of his final words: “I’m ready for the dirt nap, but you can’t leave the party if you can’t find the door.”

“He found the door,” wrote Bunky’s nephew, “but the party will never be the same without him. In lieu of flowers, please pay someone’s open bar tab, smoke a bowl, and fearlessly carve out some fresh lines through the trees on the gnarliest side of the mountain.”