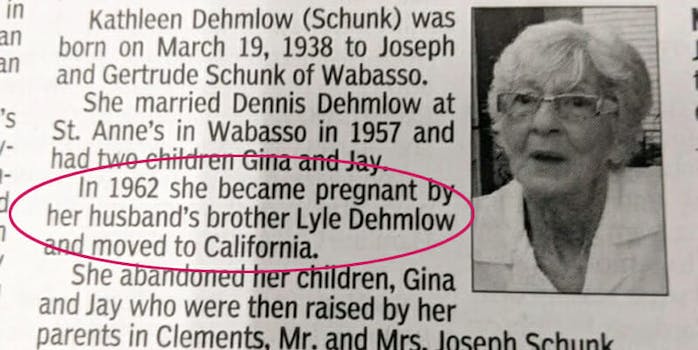 That got dark fast!

Every now and then an obituary goes viral, usually because it highlights that the person being honored was funny, odd, or extraordinary—or, most commonly, a combination of the three—when they were among the living.

This is not one of those obituaries.

Kathleen Dehmlow who died last week at age 80 in Springfield, Minnesota, was remembered in a brief, scathing obit presumably written by her children for the Redwood Falls Gazette. First noticed by @RandBallsStu on Twitter, Ms. Dehmlow’s obituary starts out innocently enough, before taking a turn for the “OH HELL NO.”

After detailing some relatively mundane facts about when Dehmlow was born, it goes on to paint a salacious scandal of Dehmlow getting married and having two children, Gina and Jay, before getting pregnant by her brother-in-law and then running off to California and abandoning her family. It goes on to say that Gina and Jay were then raised by Dehmlow’s parents.

“She will not be missed by Gina and Jay, and they understand that this world is a better place without her,” it concludes at the end, kicking the woman while she is dead.

The Gazette removed the online listing this week when the obit went viral, and the general manager for the paper would only say that the family paid for it, and subsequent attempts to contact Gina and Jay were unsuccessful.

But so many questions remain! How did Kathleen end up back in Minnesota? What became of the love child she ran off with? The obit quickly became the subject of speculation and amusement on Twitter.

Also, what about Lyle's kid? Did she have it? Did Lyle's baby write another obituary?

i smell an award-winning podcast.

I miss my mom and dad, and I’m grateful this wasn’t the obit I had to write…

I *do* hold this sentiment for a member of my family, though, and it sucks. https://t.co/TAaLA3moPn

Passive aggressive? Nah, just aggressive. Be good to your children ‘cause they have the last word. #nextlevel #kathleendehmlow pic.twitter.com/u8zxx8rXQA

But wait, the plot thickens!

My family lives in Wabasso. The population is only about 600. I'll definitely be asking them about Kathleen Dehmlow.

Lmao yes. Everyone says she was a saint! Her kids better not step foot in Wabasso. People are pissed.

We may never know the real story, but this isn’t the first instance of an adult child leaving a parent an unflattering obituary. In 2013, a woman named Katherine Reddick went viral for penning the obituary for her abusive mother, describing how she and her siblings were routinely subject to cruelty and neglect.

If there’s one thing we can all take away from this:

Moral of story: Do better by the people who will one day write your obituary. https://t.co/OgUTz3Vp0G