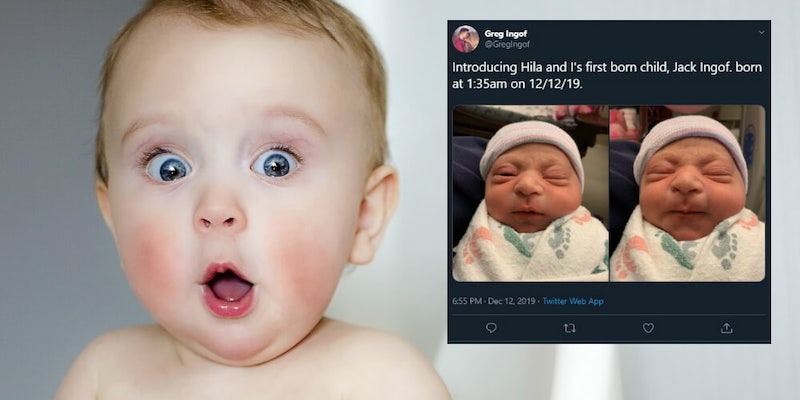 Did a Twitter user really get tricked into naming baby ‘Jack Ingof’?

'You should name him Jack.'

In the age of social media, it’s easy to turn to our many online friends and followers when we need help coming up with options for something like naming a pet, or maybe even a new baby. But if you do, it’s important to pay extra close attention to make sure the person so kindly giving you advice doesn’t have a hidden agenda.

A Twitter user by the handle of @endeylol certainly had something other than benevolence in mind when he suggested another user name his newborn child “Jack” earlier this year.

According to screenshots, @endeylol got his wish and the proud new father did just that.

“Me and my wife are expecting our first born child in 2 months and we still don’t have a name LOL!” a Twitter user by the name of Greg Ingof wrote, per screenshots.

And there it is. Greg and Hila Ingof’s first son: Jack Ingof.

“You just ended his life he just got here,” Twitter user @ImBuzzBunny bemoaned.

Another joked that while Jack will hate his full name in high school, he may come to “love it in his edgy 20s.”

Smh I’m pray for that kid

Imagine seeing him as a grown adult, fully ripped with blood of a crook on his hands, coming to you and saying “Hi, I'm jack ingof”

“so daddy, where’d my name come from?”

“are you in the right headspace to receive information that could possibly hurt you?”

As for the guy who suggested it all, he was sitting in his corner of the internet, cackling over the fact that he definitely destroyed any chance little Jack had at a normal life before he even opened his eyes.

I ruined his career before it even started LMFAOO

Both the good news and the sad news is that the whole thing is most likely fake. Endey seems to run a satire account, and there’s no @GregIngof registered on Twitter nor are there any tweets directed at him prior to the date of Endey’s tweet featuring the screenshots.

There is, however, a @Greglngof account (that is, “Ingof” stylized with a lowercase “L” instead of an “I”) created this month for the clear purpose of playing along with the joke, and we’re loving the commitment.

The moral of the story remains the same: Name your kid yourself, and ask many to vet the name before you commit it to a birth certificate. Please, think of the children.