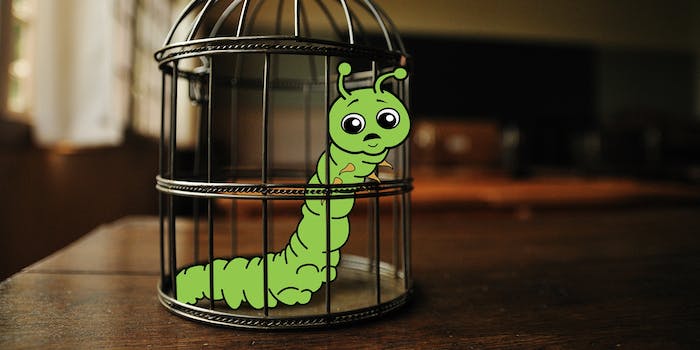 This goes deeper than you can imagine.

The baby-naming industrial complex is rife with problems. Many decry the use of Instagram filters as fodder for names, occasionally veering into the outright discriminatory when it comes to the question of “acceptable” monikers. A quick Google search of inquiries relating to mockery of names, meanwhile, yields the kind of heartbreaking advice column pleas that have parents thinking twice on what to call their spawn.

Naming suggestions, especially online, have the capacity to be legitimately hilarious, though. Hidden between the gnarled branches of crunchy mom blogs and compound word aficionados aiming to make their mark on the child they already helped create in the first place, you find pure artistry.

Perhaps you’ve seen the Facebook page for Baby’s names, an absurdist buzzword-centric haven made popular in 2013 thanks to a viral exchange between a disgruntled parent and the page’s mascot, Buge.

The poetry in motion that helped birth the Facebook page Baby’s names is now threatening to destroy it—again. The anthropomorphic green caterpillar-esque insect lovingly referred to as Buge has been captured.

All of 54 people shared Buge’s plea to break free from the clutches of Auntie Kayla, a towering figure who’s been lurking in the shadows since 2014, when she took over the Baby’s names page after discovering her nephew’s involvement.

“I am going to make it what it should be, a place for parents to come and get real, wholesome name inspiration for their newborn children. No longer will his reign of atrocious naming terror plague the internet. It’s time to fix this and usher in an era of real names,” Kayla wrote in a post dated Nov. 21, 2014.

She may have had some support her in decision from parents seeking legitimate naming suggestions—not to say that Worldwar Cardboard, Beem Bap, and Mort Ga Gor aren’t compelling groundbreakers. 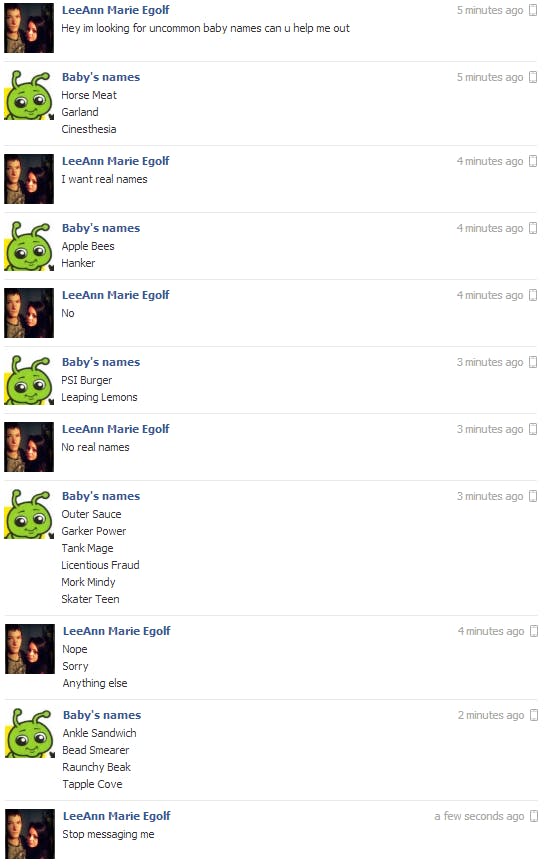 As serious as parents are about finding the right name to bestow upon their child, Baby’s names fans are just as fervent to show the world how much they #LoveThisBug. Following Auntie Kayla’s initial takeover, two Change.org petitions were launched in protest, garnering a cumulative total of 169 signatures (nice) from Buge supporters all over the world.

In a March 2015 Twitter exchange with TMZ’s Erica Steiner—also a massive fan of Buge and its naming capabilities—Baby’s names highlighted the more sinister aspects of having a devout internet following.

@SendARavenPlz what did you think of the Auntie Kayla saga. you know we got death threats because of that? Baby's names is Serious Business

The Baby’s names Twitter page takes a far more sober approach (though it has tried to eliminate the name “Josh,” among many other obscure quests) in the way it does business, doing away with the fluff of an antagonist who may not be real and attempting to connect with supporters and kvetch with fellow online sensations, including the elusive @dril.

@Babysnames idont know who the face book guy is. hes fake and has no respect for Content

Owing to my own morbid curiosities, I tried to reach Buge and the folks behind Baby’s names. The admins of the page are typically fairly responsive, though they’re also pretty honest about the way in which they’ll reply.

Unfortunately, I received the former rather than the latter. Baby’s names was silent, my fixations stoked further by the push-pull of a mercurial transparency akin to the page’s struggles at keeping Auntie Kayla at bay. Looking back at her initial reign, it’s hard to imagine why the folks behind Buge and company keep bringing her back when such a tidy post concluded the first saga.

On the surface, Baby’s names is great for a laugh. Enter the middle rungs of the bizarre ladder running straight into the heart of humanity and you’re met with legitimate connections. Buge hosted an online screening of the 1994 shit-flick Baby’s Day Out, which saw a decent amount of fanfare from diehards, but nothing compared to its 34,000+ strong Facebook audience.

Then there’s the final level of what, exactly, Baby’s names encompasses. Just under the unbelievable “start date” and comical “short description” on the Facebook page is a description containing an entirely reworked version of the first passages in Genesis:

…Bug said, “And now we will make human babies; they will be like us and resemble us. They will have power over the fish, the birds tho, and all animals, domestic and wild, large and small.” So Bug created human babies, making them to be like bugself. Bug created them silly and stinky, blessed them, and said, “Have many cries, so that your screeches will blast over the Dust Globe and bring it under their control. I am putting you in charge of the fish, the birds tho, and all the wild animals. I have provided all kinds of grain and all kinds of fruit for you to eat; but for all the wild animals and for all the birds tho I have provided grass and leafy plants for food”—and it was done. Bug looked at everything Bug had named, and Bug was very pleased. Evening passed and morning came—that was the sixth Wakie Wakie.

The heavens and earth have existed as a means for Baby’s names to world-build. It’s this type of immersion that would inspire someone from Canada and another person from the United Kingdom to take to Change.org to advocate for a cartoon insect’s release, which may very well happen again.

Fans fear that the benevolent Buge has turned vengeful, that this is indeed Baby’s names’ Revelations—and that its world is ending. Something tells me we haven’t heard the last of Buge, though.