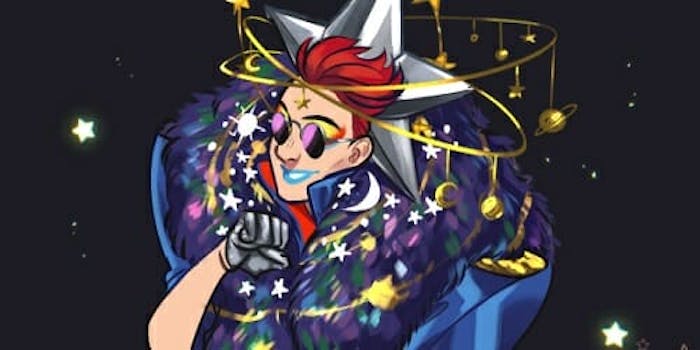 The rest of Twitter may have been confused about what the Metropolitan Museum of Art’s annual gala’s “camp” theme entailed, but not its artist community. While the theme inspired plenty of the over-the-top ensembles fans have come to expect from the Met Gala’s celebrity attendees, artists shared their similarly flamboyant original designs with the trending Twitter hashtag #metsona. It’s a fairly new tradition, but one that caught fire thanks to this year’s bombastic aesthetic and the fondness many creatives have for it.

The trend appears to have originated with a tweet last year by artist Kevin Wada encouraging his followers to doodle what they would have worn to the highly anticipated event. Last year’s theme, “Heavenly Bodies: Fashion and the Catholic Imagination,” stirred up controversy for encouraging the use of holy artifacts as inspiration for modern garments. However, the show proved immensely popular nonetheless. At the same time, hundreds of artists delighted in creating what’s essentially cosplay for one of the most intentionally extra-as-hell events in the industry. While the hashtag started on Twitter, it quickly spread to other outlets frequented by artists like Tumblr and DeviantArt.

So this year while Fantastic Beasts star Ezra Miller rocked multiple pairs of eyeballs and the Jenner sisters gave viewers deja vu with their gowns at the Met Gala, artists flooded the internet with their takes on camp red-carpet looks. Everything from Disney Channel original movies to Ikea furniture to cryptids and aliens served as influences on the designs. Considering many gala attendees of the straight male variety did little to incorporate the theme other than bedazzling their suits, the variety and creativity were refreshing. It may be why this year’s versions gained so much popularity that the hashtag earned its own Twitter moment Wednesday.

my goal is to become bffs with anna wintour, get invited to the met gala, and absolutely SLAY in a mothman look for the cryptid themed ball that will definitely happen one day #METsona pic.twitter.com/y3HOybiQO9

💫 this year's #metsona brought to you by zenon girl of the 21st century and moon shoes 💫 pic.twitter.com/95J6gschrU

Illustrator Annabelle Hayford, @sparklyfawn, originally came across the hashtag last and was excited to use this year’s version to highlight the LGBTQ community’s contribution to the camp aesthetic, they told the Daily Dot. “I also really wanted my metsona to have a narrative behind it because from what I notice from this year’s gala, the ones that truly embody the theme had some type of story.” The theme of a camp gender reveal party melded both these ideas perfectly, they explained.

The camp theme played a large part in why author and illustrator Mady G., @MadyGComics, participated for the first time this year: “because I’m campy as fuck naturally,” he said. Many artists the Daily Dot spoke with shared a similar sentiment. Liberace, Elton John, and the psychedelic aesthetic of the ’60s and ’70s were among the many inspirations for his colorful design. “I also wanted a subtle element of horror, hence the ‘human teeth’ style platforms peeking out at the bottom.”

Since I didn't do one last year, here's my #MetGala #metsona look.
I mean, it's "camp" this year, how could I NOT attend?? pic.twitter.com/09hdDRLJYY

Some artists cited fictional characters as the inspiration for their Met Gala looks, while a few went a step further and designed outfits for the characters themselves, all appropriately camp of course. At least one Twitter user took the theme to an apropos meta level, incorporating the aesthetic’s seminal text, Susan Sontag’s Notes on “Camp”, into a gala ensemble.

The hashtag’s return for a second year was particularly welcomed given the extensive online grumblings over which celebrities pulled off the aesthetic successfully. Looks like Twitter users may not have been the only ones confused over what exactly “camp” was if the many subtweets by salty viewers were any indication.

Waiting for the return of the #METsona tag cause internet artists just do it better pic.twitter.com/DSViVaIZMk