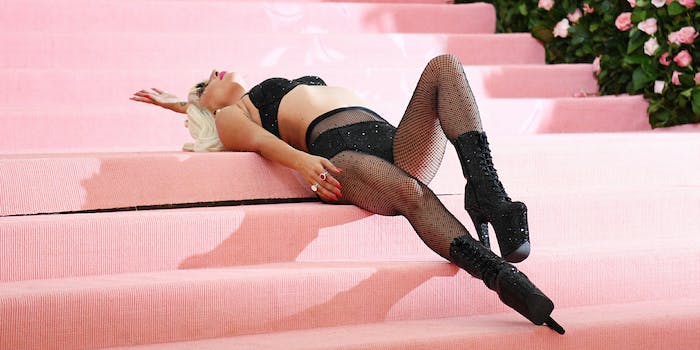 Except for Lady Gaga, of course.

On the first Monday of May every year, celebrities and public figures attend the Metropolitan Museum of Art’s annual gala sporting over-the-top outfits that nearly always become instant meme fodder. The event celebrates the Met’s opening of its fashion exhibit at The Costume Institute, and the celebration’s dress code matches its theme. This year’s theme, “Camp: Notes on Fashion,” had Twitter abuzz before the gala even got underway, with many asking the same question: What the hell is camp?

No, it’s not where you spent your summers as a kid, as many Twitter users guessed.

my two brain cells seeing that the met gala theme was “camp” and thinking it meant summer camp: pic.twitter.com/sWf1meiCsL

The theme’s title is a play on writer Susan Sontag’s essay “Notes on Camp,” one of many famous attempts to define the famously ambiguous aesthetic. Even with Sontag’s list of 58 bullet points, the fashion world still seems to lack a definitive answer. No wonder Twitter’s confused.

At its essence, camp can be broken down to “its love of the unnatural: of artifice and exaggeration,” Sontag wrote. “Camp sees everything in quotation marks” and adores “things-being-what-they-are-not.”

The few users who instantly understood the theme had low expectations that the Met Gala’s celebrity attendees would do the esoteric aesthetic justice. After all, camp embraces the uniquely flamboyant and skirts the line of good taste—not exactly the kind of looks most millionaires rock.

me tonight, devoting hours to watching a group of celebrities who will, inevitably, either misinterpret or wilfully ignore the #MetGala theme: pic.twitter.com/5OHW9x0PAT

Except for Lady Gaga, that is. Even if Twitter couldn’t settle on one definition of camp, the majority agreed that the musician and Met Gala curator embodies the aesthetic. Her four (yes, four) outfit changes at the gala ended with her in only rhinestone speckled tights and lingerie, and she easily became the frontrunner for best on the red carpet.

lady gaga is literally the perfect host for this year’s met gala theme like literally what else screams camp louder than gaga?

Singer and actress Janelle Monáe, too, was applauded for nailing the assignment.

The museum’s exhibit hosts more than 200 pieces of “camp” from the last several centuries, including a room dedicated to Sontag. It will be open until early September after a public debut Thursday.