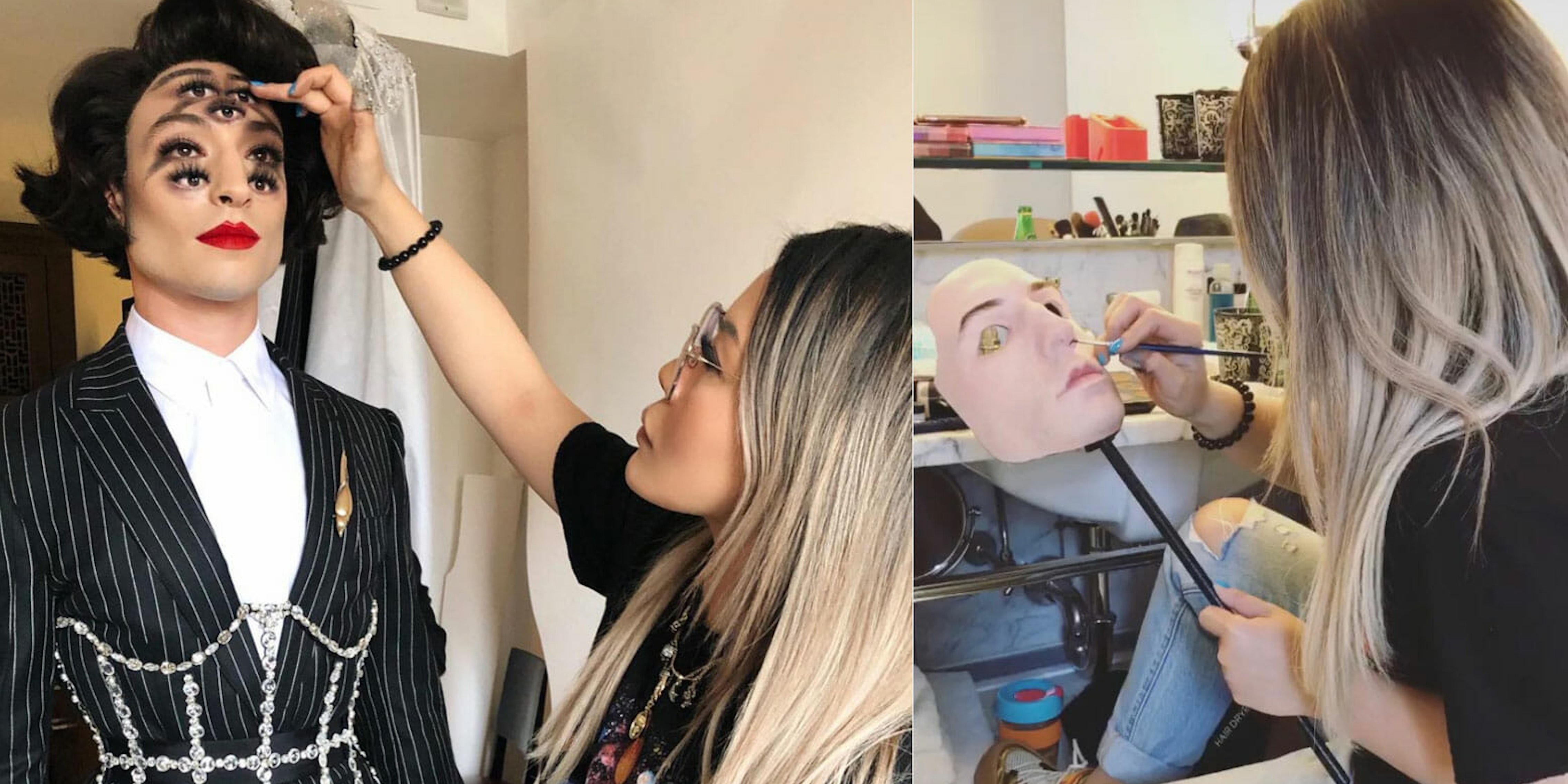 The optical illusions Choi creates will blow your mind.

Fans are still reeling from the fantastical and nonsensical magic on the Met Gala’s pink carpet last night. Billy Porter, Lady Gaga, and Cardi B were among the stars that took the theme “camp” to new heights, but Fantastic Beasts star Ezra Miller was no slouch, either. His entrance included taking off a mask to reveal seven eyes. Even the Met tweeted that his costume was “the epitome” of the theme.

That mind-blowing eyeball art wouldn’t even exist, however, if it wasn’t for Vancouver-based makeup artist Mimi Choi. With 1 million Instagram followers, Choi has made a name for herself painting not just eyes on faces, but faces on faces, and animal faces on faces, and waves and cake slices on faces, all forcing you to do a double take about what’s real and what’s possible.

Choi told the Daily Dot that she and Miller had in-depth conversations building up to the event to figure out what they wanted to achieve. “It turned out that our visions were aligned as we both had one of my past illusions in mind—a kaleidoscope look. I was excited that he wanted something so bold.”

Choi took it from there to create the masterpiece and said she worked on it from 4a.m. till 9:30a.m, and stayed around till the evening for further touch-ups. Her Instagram story shows the gradual progression of her artwork in the build-up to the event.

Choi was a teacher before becoming a makeup artist full-time, but she said during her four years of being a Montessori instructor, she felt “suppressed” in the way she had to dress and act.

“To relieve my stress, I would often paint on my nails or doodle at home in the evenings,” she said. “It was not until my mother outright asked me if I was happy with my career that [I] became honest with myself.”

She then enrolled in beauty school and began working for the school’s retail store and teaching after graduation.  Now, she creates looks for celebrities and magazine photo shoots.

Choi says her inspiration ranges from artists like Salvador Dalí and M.C. Escher to the sleep paralysis she suffers from. “During these episodes, I have visions that can often be frightening and these have inspired some of my more morbid looks like the distorted faces,” she says. However, she’s careful not to follow other makeup artists too closely as it “stunts [her] evolution as an artist.”

“I always encourage my students to create their own trends by doing what they love,” she says. “While it can be good technical practice to recreate someone else’s look, it is so much more rewarding to create from within.”

When you can execute sushi and butterflies bursting from your face, your creativity seems solidly infinite.